IVICA: all your stuff

There's no economic need to throw stuff out; it is less expensive to keep things indefinitely than to take the time needed to decide what to keep and what to throw out. But Cathy Marshall's fascinating keynote at IVICA raised a host of questions about the way people actually cope with all their digital stuff.

Cathy has been going to people and exploring all the digital stuff they have and how they work with it. The corners of their hard disks, the seldom-used old computers in the kid's room or the attic, the pile of old CDs in the desk drawer: everything. This reveals some very interesting lessons:

Cathy also had a wonderful discussion of how "an anonymous referee who happens to be in the room today" (me) had disagreed with one of her earlier papers on digital preservation, and why my the referee was wrong. I had argued, in essence, that preservation is fairly easy for anything that has an audience, and anything that doesn't get looked at every generation or so is going to get lost whatever we do. Cathy's refutation, in essence, is the box of family photos in the back of the closet: you don't especially want to take it down right now and look at pictures of Aunt Tillie's prom dress right now, but it's nice to know you have that box even if the next time it's opened is when your kids are packing up after the funeral.

Here's my Tinderbox map from IVICA. One thing we need to understand better, I think, is how note-taking impacts understanding, concentration, and memory. I find that sketchy Tinderbox notes help me focus in ways that paper notes did not. 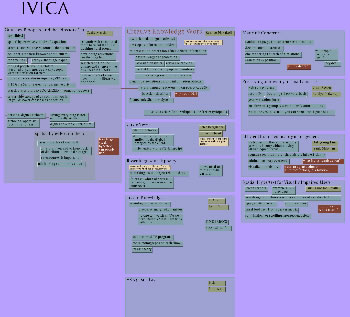