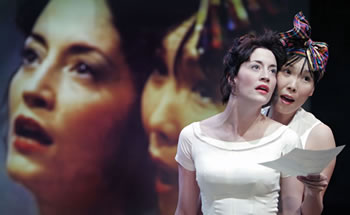 It's 1792; Count Almaviva is an old man, hiding from the revolutionary mobs in his crumbling palace, protected by good old Figaro. Susanna has fled to America, where she works for nice Mr. Jefferson and sends back cartons of potatoes. The countess lives quiety in the countryside, a single mother. And so the Count and Figaro look back on that day when everything went mad — a day, in this telling, that lit the bonfires of revolution. 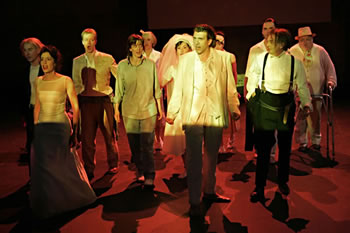 Dominique Serrand and Steven Epp take Mozart's entertainment, conflate it with Beaumarchais' confection, and wind up with something new, dark, and profound. It's even more refracted than Don Juan, and the orchestration (string quartet and keyboard) has the effect of focusing all the weight of the big, complex scenes on the singers. It's not just Mozart and Beaumarchais; look into this production and you see depths of Beckett, for example, you don't expect to meet here.

Everyone expects a standing ovation these days, but this is probably only the third or the fourth real ovation I've seen in — can it be? — something like twenty seasons of this company.