The NeoVictorian Computing impulse is Romantic, but it is also grounded in Realism. Not the realism of endlessly replicating variations on the same Human Interface Guidelines to keep Look and Feel

from escaping from their cages, but the realism that asks us to look at things as they are and as they should be, and to do something about the difference.

Peter Turchi is also an invited speaker at this year's OOPSLA. In Maps of the Imagination: The Writer As Cartographer

One of the impulses behind 19th century realism was to tell the stories of people whose lives had not, previously, been deemed story-worthy. Another was to describe the world as it is. 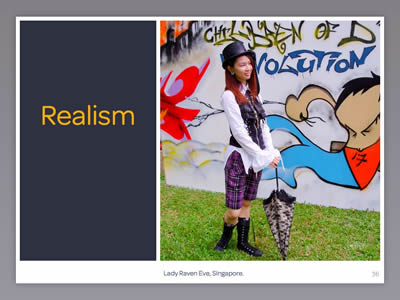 Honest materials are important to Realism; we show the painter in the studio because that's the painter's world, filled with clutter and turpentine. Realism prefers honest wood to cheap gilding. If something needs to be clay or plastic, let it be what it is: don't pretend it's sterling. Don't fold your napkin into a pheasant, and don't hide the structure behind layers of sham.

All the fuss about the icon dock's perspective and reflections, all the brushed metal windows and all the skinnable apps, they're all dross. It's simulated kitsch, so it does no particular harm, but it's a game. Delicious Library has terrific wood shelves, but it's just a list of your stuff.

Limitations matter to Realism, too. We may struggle against them, creating paintings more real than photographs. We may accept them, knowing that brushstrokes and chisel marks are part of art. Either way, we are aware of them, and we want the viewer to know what's going on. Realism doesn't pretend to be a friendly paper clip: if you have got something to say, say it. 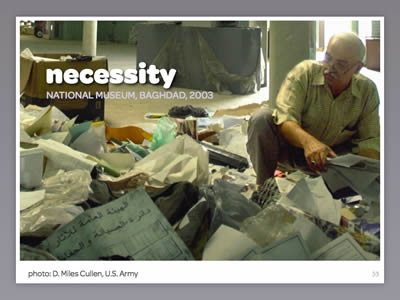 Finally, Realism accepts that real people have real work to do. It's not merely filling out forms or looking up facts: these are terrific things to study in the usability lab, but they're not what people need to do. People need to rebuild wrecked museums and wrecked families. They need to make sense of lymphoma, or partial differential equations, or RFC 822. People find themselves in astonishing, unexpected situations: one day you're a travel writer or an unemployed Republican protégé, and tomorrow you're going to be a minister in the Iraq reconstruction. How can you learn what you need to know, in time?

In 2003, most of those people failed. Their masters may have been scoundrels, but they were not. They had a job to do, and it appears to have been a job they could not have been expected to do. This a task for engineers: to build machines that let people do what they can't do with their bare hands.