A PR firm pitched this book to me with exceptional skill, and since I’ve been wanting to explore some North African braises and stews this winter, I went along. So far, it’s been a tasty trip.

The market-imposed format promises 150 recipes, so you’ll get your money’s worth. No one needs 150 recipes. First, we don’t want 150 things to cook, not unless we’re Carol Blymire or Julie Powell

. We want one or two new things to cook that are delicious and new and that we can vary along one or more dimensions when we’d like to change them.

The book starts with an exceptionally good and direct rundown on tagines as cookware, including a frank and supportive discussion of the comparative merits of Le Creuset and Staub adaptations that use new materials for Western kitchens. There are good discussions of North African and Mediterranean spices and spice mixes, too. What I miss here is a clear feeling for the difference between a tagine and a partly-covered cocotte or Dutch oven. 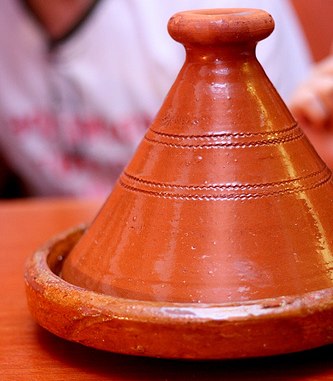 Similarly, it's not entirely clear to me, after casual leafing and after cooking a recipe or two, exactly how a tagine differs from other braising techniques – from what you might see in Provence, say. Is it mostly about spices? About cooking in water rather than stock and wine? About eating with your hands? About cooking for a very long time? Some questions of technique seem obscure, too; should we sometimes brown the meat but sometimes not? Should we brown vegetables?

Despite these objections, last night’s lamb, stewed for hours with apricot and pear and lots of berbere – a new discovery for me – was very tasty indeed. And, despite the unpromising cover, it wasn’t underspiced or timid, but had lots of full-throated heat and depth.