Paris is rich in small, specialized shops. They often cluster together, as they did in the Middle Ages. Rue Dante, today, is a center for comics and role playing games. You constantly bump into specialized bookstores. And, of course, the bread store, the pastry store, the vegetable store, the butcher -- all separate.

I was asking a professor at the American University of Paris (where I gave a talk and enjoyed some interesting discussions) about the economics of retail in Paris. How do small stores resist the pressures that have turned the US into the land of Wall Mart and Barnes and Noble? Perhaps, I suggested, labor costs are less, permitting stores to stay open with less overhead?

"But surely," she answered, "your labor costs are lower!"

That's a tremendous change. From Mark Twain's time on down, US labor has been famously expensive. An empty continent, insatiable competition between agriculture and factories, the land of opportunity -- all contrasted with the huddled tenements of Europe.

But one conspicuous absence during my strolls has been Web design boutiques and studios. You see plenty in London, for example. And I've seen plenty of WiFi cafes, computer stores, internet access points, interactive game sellers. But fewer galleries than I'd expected -- rents are high, I hear -- and many fewer interesting signs for trendy Web firms. Perhaps they're in another street. 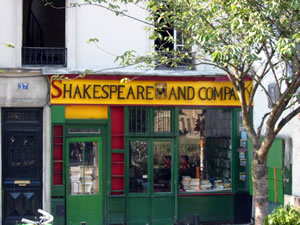