Not long ago, if you wanted to go from Boston to Sydney you spent months en route, and ran risks comparable to undergoing a coronary bypass. Now, it's just a long plane flight followed by a very long plane flight. (Even this is going to vanish shortly; when the next Boeing comes online, it'll be one long flight.) The time difference, of course, is ferocious. My hotel turns out to be an auxiliary function of the Masonic Club, which is interesting because Linda and I spent last Sunday at the Lexington Museum of Our National Heritage, which is a Masonic headquarters.

I arrived early in the morning, checked in, and thought it best to keep moving. I walked over toward the Art Gallery of New South Wales, passing this uniquely Australian statue of Burns.

The Gallery has some magnificent rooms of Victorian era art, mostly British but with some very fine representatives from France and Germany. Here's a wonderfully sentimental statue about dead kids; we used to make fun of the Victorians because their art harps so on how you are supposed to feel about things, but sometimes stuff happens and you don't have the foggiest idea about how you ought to feel about it, and that makes deciding how you do feel about how you feel even harder than it might otherwise be. 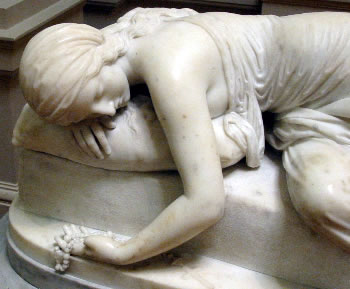 To continue my Australian theme of trying to do too much, I followed this by a stroll through the botanical garden and bought some theater tickets at the Opera House. Then home, quick change, and an early feast at CBD (across from the Grace Hotel, Macarthur's headquarters and apparently the only building in the world influenced by the Tribune Tower in Chicago). The highlight was a very well-made and well-cooked pheasant sausage, served with one fondant potato.