On Sunday, I took a little stroll in the Peaks District, planning to follow the conference chair's advice and walk from Edale to Hope. Walking to Hope sounded nice.

It was a good deal more exciting than I'd planned. 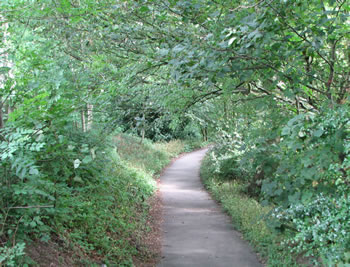 I'd expected a gentle stroll amongst country lanes, with views of gardens and summits and declivities. A walk suitable for the Miss Bennets, or Mary Russell at the outermost. I was equipped with sturdy shoes, a bottle of water, a tomato and Taw Valley Cheddar sandwich, and an Ordnance Map of the district. I was fit. I was prepared. I was feeling salty as hell. 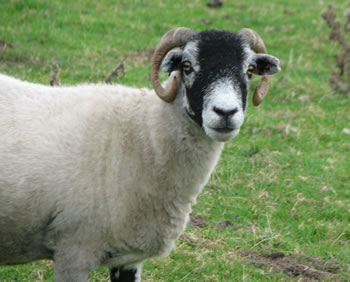 There were a good many sheep along my walk. They come in many varieties. Most were a bit reserved, but some were very curious about hypertext.

The very helpful gentleman at the visitor's center gave me printed directions to the most suitable trailhead, explaining that perhaps the signposting might be less prominent than I was accustomed to in the States.

It appears that, when a trail crosses a pasture, there is no perceived need to indicate the trail at all. Having entered, you must exit; you're simply expected to find the other exit and proceed. Or, perhaps there's another secret. 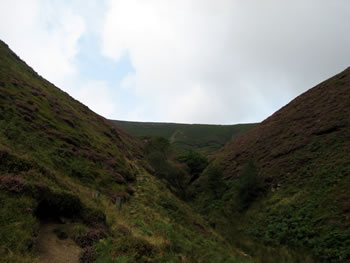 And so I arrived at the trailhead and set out, and here things began to go badly wrong, for the simple reason that I had set out on the wrong trail. Or, I think, on no trail at all. I have read about following a sheep path on the moor. I know about this. Didn't stop me. So I started to climb, following this nice little footpath, clinging to the side of a steep and increasingly narrow little valley, clambering up a tall ridge.

It was the wrong ridge.

But, far above, I could see lots of people on the trail. They were happy people, on a busy trail. Many had walking sticks, which it seems are all the rage in the Peaks District these days. I pushed on and up. I wanted to join them.

I discovered an interesting fact at this point.

In Colorado, say, you get boggy swamps in lowlands. In Derbyshire, you can be at the bottom, the top, or in between, standing on a steep, steep slope, and you carefully set you foot to keep your balance in a patch of dirt that looks a little muddy, and glop! you're up to your calves in glutinous brown mud.

There were lots of sheep. There have been lots of sheep here for a long time. In consequence, approximately every plant has thorns, or little prickles on its leaves, or burrs. I soon had legs covered in mud, hands covered in bleeding scratches, with a cloud of pursuing midges who had discovered true love. 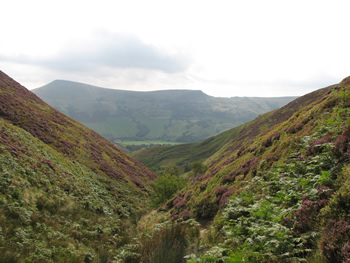 So, at this point I'm getting quite high up the slope, which is getting much less passable, and the trail has given out entirely. But, at the ridge, there's a steady stream of hikers: that's were I ought to be. There were still occasional sheep about. I did reflect, frequently, that "if Linda were here, she would have said, 'This is not a trail!' several miles back." And she would have been right.

It was tiring. I made it. Eventually. Hooray.

Lunch. Another tomato baguette, or six, would have been welcome. Never mind; I was at the top of the ridge, and some small privation — a few cuts, some scrapes, a cloud of midges, a shortage of baguettes — are only to be expected.

Confidently, I set out, smiling and nodding at each encounter with a fellow rambler, restored to society once more. Good times, good road. Everyone was cheerful. A group of fresh young fellows, led by a wiry older man who looked like he knew just where he was and where he was going, walked past.

"I've been waiting to ask this question for many years."

"Hope. No, I don't think so!" He looked concerned and pulled out his map. Much study ensued. "I think you have gone wrong. Down here," he said, pointing to an indistinct spot on the map, "you would have lots of choices. There's a very nice pub in Hope, you know." A pub sounded very nice to me, right then, since pubs tend not to have gelatinous brown mud, thorns, or precipitous ridges. "But you're up here. If you want Hope, today, I think you really need to go down this clough."

And so I set off down the clough. It was a nice clough. A stream runs through it, as streams will. 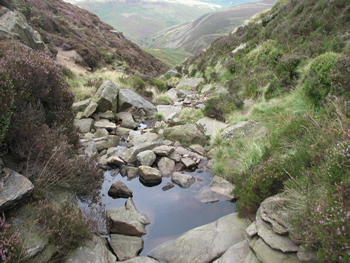 And here, again, we find ourselves in a muddle. There was no trail to be found. Much of the descent was steep, and much of it was wet, and lots of bad things can happen when clambering over wet rocks in a stream in a hidden and obscure defile in which one was not expecting to be. I observed to myself that, if someone at Hypertext '07 was wondering where they had mislaid their track chair, this particular clough would not be the first place they would look.

I was sure there must be a trail. Somewhere. Unfortunately, I was at the bottom of the clough, so any attempt to find the trail involved struggling up its steep and thorny sides. My ordnance map made an excellent sail, but did not offer any clear advice. The clearest thing it told me was that no feature in sight conformed to the place my advisor had told me this was.

I decided the trail couldn't possibly lead down the wet boulders, so I climbed the ridge to what looked to be a trail. It was a disused pasture wall. I climbed some more; but this was getting serious. As the view improved, I realized that my revised itinerary had almost certainly been proposed by a fellow who, like me, did not know where he stood: the clough I was clambering was distinctly curving, and the Ordnance map clough had no curve. 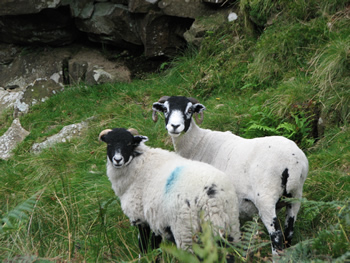 I did not fall off cliff, or down either clough. I did not spend night on moor, though was thinking very seriously of making provisions.

And so, eventually, I got back down, and now I was again on real footpaths. I was also far from Hope, and night was not that far off. But there were sure to be some hours of daylight left, and on I went. And then, the map said that if I were only to follow a spur and climb this little ridge, there'd be a Roman road. 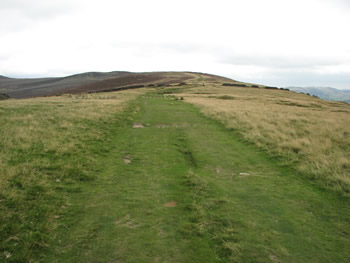 By this time, I really must have been tired, as I did notice how the trail up the ridge crossed quite a few of those little brown lines on the Ordnance map but somehow failed to understand exactly what this meant.

I am still sore.

This must be Tolkein's Eriador: barren hillsides with lovely views, crossed by The Road and The Greenway and dotted with ruined walls and strange, deep holes. Somehow, I managed to notice the cairn that marks the path that winds slowly down the ridge and into the lovely hamlet of Hope, Derbs. 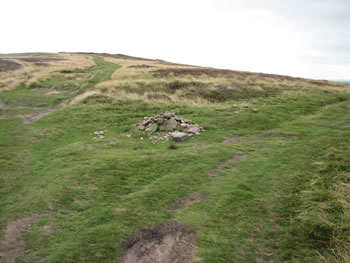