A highlight of Hypertext '07 was j. Nathan Matias' panel on Hypertext and Tragedy, with Emily Short, Nick Lowe, Dave Millard, and Kieron O'Hara. (Dave Millard's trip report is terrific; read it.) Matias has some interesting notes in preparation for the panel, and we've already touched on the topic leading up to the conference.

One very interesting point: O'Hara, exploring the differences between ancient and modern tragedy, argued that the Greeks were interested in the tragic process while modern tragedy focuses on a state, on a moment. His illustration for this point was The Awakening Conscience, a painting by William Holman Hunt. 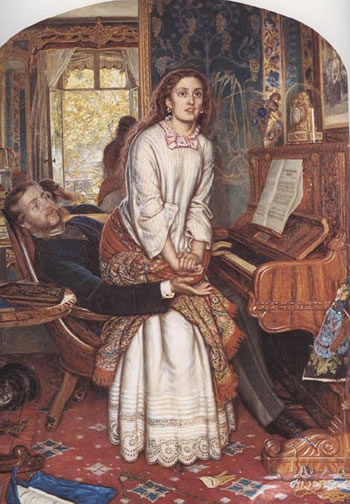 There's a lot of stuff packed into this picture; the core point is that this woman has just realized that this affair cannot and will not come to good. It's a "what am I thinking?" moment, the moment when we realize that things have gone off the rails.

I'm very interested right now in the power of an image and a handful of words to spring an entire narrative. If you're working this vein, we need to talk.

But in this case, I think O'Hara's illustration is wrong: this is a narrative moment, but it's not tragedy. We are not ruined: our clothes are intact, the door is open, we have not yet been discovered. And, more to the point, we knew this wasn't going to work. The young man is already pudgy. His clothes are too good. He is a slob, and doesn't pick up his things. This can't work, we couldn't really be thinking of risking everything for him.

He's not the dangerous, tragically wrong boyfriend who makes modern parents stay up and pace the hall. He's a phase.

And this isn't a tragic moment: it's a melodramatic one. "Melodrama" is so often a term of abuse that we forget the point: melodrama creates drama from heightened circumstances, thrilling the audience by creating tension even though we all know that the tension will be resolved. Lots of great art is melodramatic: it's natural to expect extraordinary lessons from extraordinary events. 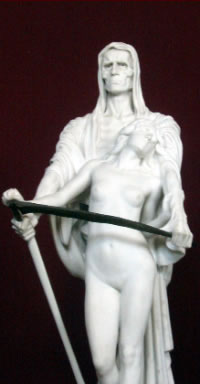 Plenty of art moments are about tragedy. This one, I think, is specifically about cholera.

(Yes, you can have a melodrama that ends unhappily. And I'd suggest that Don Giovanni is a tragedy that ends happily: D. G.'s point is that you take your pleasure and pay the bill and behave as a gentleman by your own lights. If the Commendatore absolutely insists on fighting then you must oblige him, and if his angry ghost invites you to dinner then you really cannot refuse and besides, with the score mounting to 640 Italian women, 231 Germans, and so forth, Hell is at least an undiscovered country.)