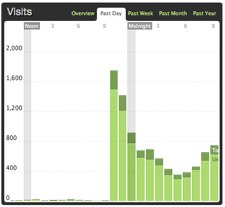 I trundle along here with a few hundred readers a day – which is terrific and thank you all – but from time to time something crops up and it’s Grand Central Station. One little rant about laziness and corruption in the trade press, one little post from John Gruber’s Daring Fireball, and we’re off to the races.

Genreville ticks along with a modest quantity of traffic and modest comments. Then they hit a story about agents to try to convince YA novelists to omit gay characters, and suddenly the switchboards light up.

This is nice. But it also smells of the nightmare Web, the Web of Drudg and AOL-Huffington and Yahoo headline soap operas. Concentration of traffic is bad for the Web, especially if it’s not accompanied by a generous range of links on a variety of sites and topics, not all of which should be sister sites.

In the Ten Tips essay, I reminded people to Make Good Friends and Choose Good Enemies, and that’s still good to do. It’s good to thrash out these technical and artistic issues with vigor and precision. It’s also important to keep perspective, especially since Europe may be falling apart as we watch and a whole lot of people need jobs and the planet is overheating.

I’d also point out that an enormous amount of what passes for technical and business writing in this industry seems unduly concerned with proving the author’s manhood. We have writers who set out to change stock prices to show they can do it. We have writers who love to kick people when they're down, because that’s when the writer seems to have the biggest feet. Almost everyone is focused on how the iPad will kill this, or next year’s Windows 8 will kill the iPad. It’s all fighting the last war, rehashing the Mac/Win fight and the Netscape/MSIE battle.

That’s all over. Mobile is different, tablets are different, the Web is different, and the world is different. That infant who was born when Sculley took over Apple? She’s 28 now, and her daughter, who is younger than Internet Explorer 7, is the person you call when you’ve forgotten the family’s Apple ID or when you’re stuck in Angry Birds. Software isn’t winner takes all right now, but you’d never know that from reading the business press.

I have a modest proposal: when a writer picks a fight and turns out to be wrong, that writer should go without a byline for a year. Want to drive down someone’s stock to show you can do it? Fine: nobody’s gonna know it was you. Want to leak some sexy story a CEO told you at a party? Go ahead, but you’d better hope the guys at the bar believe you, because your name won’t be on it.