In an interesting essay in Interactive Digital Narrative (Hartmut Koenitz et al., eds.), Janet Murray works to schematize the romantic plot, “A Tale Of Two Boyfriends” that encompasses all stories about love triangles. (Someone is supposed to have said that the Bloomsbury crowd lived in squares, painted in circles, and loved in triangles.) She starts out by frankly pointing out a problem in McCoy’s highly-respected Prom Week: the dialogue.

Zack: Do you want to date or whatever?

Monica: I kinda only should be seen dating people you know popular people.

Murray complains that these characters are “under-dramatized and over-specified”, and she is not wrong. These characters are backed by a set of thousands of sociocultural considerations and constraints, but not only do the seams show, we can hardly see anything except seams.

First, we’re using dialect to reinforce the idea that these are high school kids negotiating the prom. Dialect can be powerful, but it’s extremely tricky because it requires close observation and a degree of exactitude. Do high school kids say “date”? Would these high school kids say “date”, not “go out” or “hook up” or “hang out” or “do something”? Wouldn’t a more specific invitation be more sensible: “Do you want to see the new Star Wars, or something?” If “date” is probably wrong era, “whatever” is simply the wrong word; I believe a kid might say that, but no kid would mean to say that. “Whatever” deprecates the activity:

Mom: Get up dear! We’ve got to go to granny’s flute recital and it starts at 9am.”

Monica’s misplaced hesitations are simply condescending; not only is she shallow, but she doesn’t know how to say “uh” or where to put her “uh’s”. What a doofus.

Worse, we don’t need to reinforce the notion that these are high school kids. The premise and setting say “kids” at every turn. There’s no imperative that the kids speak with strict realism: Buffy The Vampire Slayer doesn’t. Romeo and Juliet don’t, either. No one has to be reminded that Juliet’s a kid.

Each line shouts “I am a speech act!” in every sentence: the character has a state and a goal and the line either advances that goal or describes the state. Yes, people say things for a reason, and they do things to get ahead, but it’s more complicated. Zack wants to “date” Monica: OK. It’s that kind of story -- fine. Zack is a guy who wants to date Monica. But, does Zack want to date Monica because he adores Monica, because it’d be prestigious to be dating Monica, because he really wants to sleep with Monica, because he really wants to sleep with someone, because he doesn’t want his Mom to know he’s gay and he thinks she’s beginning to suspect, because Sarah bet him box seats for the Knicks game that he wouldn’t get to second base? And besides Zack being the boy who wants to date Monica, he’s also the boy who is pretty good at Math, has a promising jump shot that might play in Div III, is worried that his uncle’s fooling around with his younger sister, thinks the novels of Susan Sontag are overrated and that Black Lives Matter.

You may object that neither Susan Sontag and Trayvon Martin will get him forwarder with Project Monica. But my coolest cousin met her husband in jail at Berkeley in the 1960s; you never know. People talk about ideas while they negotiate these things; otherwise, school kids would just ask each other, “wanna fuck sometime?” And they talk about ideas the rest of the time, too; that’s what makes these things love stories and not just genetic records.

A further problem is that so many interactive narratives – Prom Week, Façade – use a ton of screen space for crudely animated enactments. Others – A Dark Room, Blood and Laurels – avoid most of the artwork but wind up using lots of screen space for mechanics. The result is that almost everything needs to be carried in dialogue, and the dialogues need to be very, very short. There’s just not enough air to let the characters be themselves.

One alternative involves a lot of words: give the characters some air, let them have ideas. Murray’s most of the way there with her schematic of the Boyfriend of ObliGation (BOG) and the Boyfriend of Desire (BOD – the interactive narrative people love acronyms). We can use archetypes but we don’t want to hear about archetypes: we want to hear about people, and to do that, we have to give the people space to do and say things.

If all those words are just too much, you could do a lot with art – but again the art is going to have to be very specific because it’s got to convey a ton of information. It’s going to need to tell you about Sontag and Trayvon without the words. 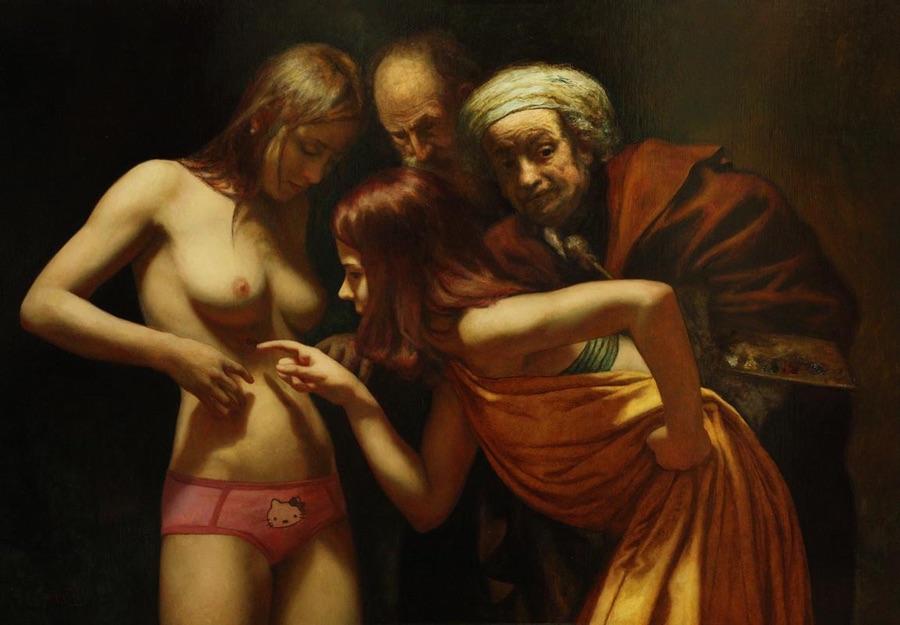 OK: we’ve got very specific people and a very specific moment, and we’ve also got Caravaggio’s Incredulity of St. Thomas. There are ideas here, and there’s narrative. But I think you’re going to need this level of thoughtfulness, and perhaps even more detail in setting, to make it work.