I spent two delightful days at Dust Or Magic in Oxford, en route to the Hypertext 03 program committee meeting. 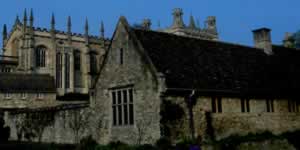 The theme of this conference was, I think, a mutual exploration of the great effort required to create important multimedia in a world that seems uninterested in, or inimical to, new media. Some obstacles were obvious: a war which nobody I met seemed to support, an American administration whose attitudes made most attendees shudder, a general absence of resources for creative work, the difficulty of finding an audience or a day job. Despite the obstacles, an scent of optimism could be detected -- especially among those who had found ways to harness corporate energy to drive creativity and to harness that creativity to improve the world.

In my own talk, a touched briefly on the set topic of Eastgate's history and the role of ideas in a non-ideal world. (What an honor to have been set such a topic amid the dreaming spires!)

It was interesting (to me) to reflect on Eastgate's research agenda, our desire that it remain a place where we can do serious research on new systems. What is distinctive here, I think, is that our research is supported by and answerable to the numerous body of users, rather than to a corporate vice president or a foundation officer.

I also spoke about the deplorable state of hypertext criticism -- about theories founded on air, reviewers unwilling to read and unwilling to understand, tolerance of sloppiness and imprecision, and a general shoddiness of argument. I had spent a pleasant hour Tuesday at the top of Blackwell's, leafing through shelves and shelves of ancient history. These writers know and use every source, weighing each one with sympathy and judgment. In new media today, if an article or book troubles to mention a handful of titles, it is an occasion for celebration.

Though participants included many multimedia pioneers -- Roger Gregory, inventory of the Hands-On Science movement and progenitor of the Exploratorium and its kin, Voyager founder Bob Stein, Expanded Book designer Colin Holgate, and convenor Bob Hughes (below) among others -- nobody seemed overly obsessed about preservation. Perhaps that's because it's not a big problem. Greeting us all as we walked into Wadham's Old Refectory for a demo session was a Macintosh screen with Inigo Gets Out, Amanda Goodenough's ancient (but still delightful) HyperCard stack about a cat on the loose. 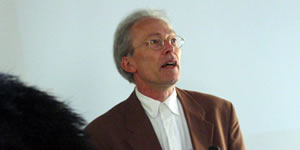 I mention this because ELO is holding some sort of a meeting this week about e(x)Literature, which is meant to anchor an inquiry for "preserving and archiving" electronic literature. It's funny that the people who worry most about this don't actually seem very interested in titles or systems that aren't brand-new. (The obvious exception is David Durand, grand FRESSer, and I really want to read his talk)