After dinner last night, I was talking with open source software engineering guru Walt Scacchi, and with Doug Engelbart, the guy who invented outliners, the mouse, and lots of other things you use all the time.

It was a Memory Lane kind of evening -- Frank Halasz was there, too, a guy who had a huge influence on my career though I'm sure this would surprise him.

Someone recalled the early personal computer flea markets. "I was there," said Doug. "I saw Bill, in a little flea market booth, selling software off his tailgate," Scacchi recalled. "I saw Adam Osborne on his soapbox, telling us to give away the computers, to give away the software. 'How can we do that?', people asked him. 'We'll all make money selling them the manuals!'"

"Well," I said, "it turned out that it was Bill who got to buy the big house." That might have been the real start of open software, right then and there. Scacchi's almost convinced me that the open software economy might work, even without the cost-shifting arbitrage that currently seems to supply so much of its fuel. 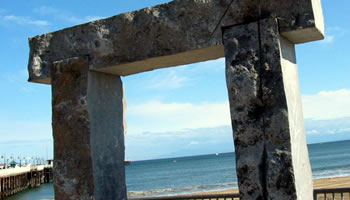 Adam Osborne was a wonderful tech writer. He built a terrific business on his model, writing a wonderful series of books on microprocessors back when microprocessors were new. I still own mine. It was brilliant: from sentence structure to production, everything was right. Osborne, and Brian Kernighan, and maybe Bob Horn (who was at Hypertext '87, though not at dinner) pretty much defined modern tech writing. Or so it seems to me.