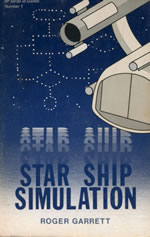 Another relic from the studio: Roger Garrett's The Complete Star Ship: A Simulation Project. This 1978 paperback describes a wildly ambitious scheme to write a multiconsole simulation of a starship bridge that would let a team of players work together to go where nobody was going anytime soon.

In an era when networking meant 300 bps RS-232 lines and a 16K kit-built computer was state of the art, this book's ambitions were wildly over the top. Page after page of drawings of console displays, schemes for representing Federation space in a handful of bytes, lists of subsystems everyone is supposed to monitor. Energy Supply, Medical Equipment Inventory, Reject-Peace-Offer subroutine...

Surprisingly, neither this book nor its author casts much shadow on the Web today. But amazon has some used copies.