One of the silliest, most self-indulgent affectations among bloggers is forgetting to sign your own weblog. Who is writing this? Your readers want to know -- especially new readers. Does this person know what they're talking about? How do I thank them? 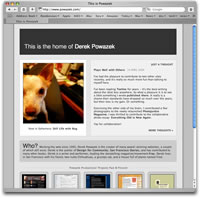 A surprising number of weblogs make is hard, or impossible, to find out who is responsible. That's silly and wasteful. It's like not introducing yourself, assuming that of course everyone knows who you are.

When I first started to meet really famous scientists -- people who had won The Prize, people who had written the book -- I noticed that most of them took pains to explain who they were and what they worked on. They didn't assume, even though everyone in the field, even beginners, knew their work.

I introduce myself a lot at conferences. This leads to embarrassment now and then. I get into a rhythm, and before I know it I'm introducing myself to people I've met before. Or people who were in the front row of a talk I just gave. But, I figure it's better to err on the side of knowing.

Derek Powazek's new redesign bends over backwards to avoid looking like a weblog. But it's a good weblog design, and it's got plenty of space to answer that important question, Who? Thanks, Anders Fagerjord.