Now at the American Repertory, and worth a detour: Trojan Barbie. The play, by Australia’s Christine Evans, does a wonderful job of blending Euripides (and Seneca– it’s pretty clear that Louise Kennedy, the Globe’s reviewer, doesn’t know about the Roman play or the Charles Mee adaptation) with a response to the US in Iraq. It’s thoughtful, effective, and it moves. I’m too close to the Trojan Women – I’ve used it as a premise for hypertext experiments — but this beats me at my own game.

(The script is available from the Australian Script Center)

Skye Noël, previously hailed here for her fine performance and ownership of the worst web site in the world, is a terrific Andromache. Careena Melia as Helen is stunning, dominating the stage. She has the best dress I’ve seen in years. Karen MacDonald as Lotte, a British doll hospital owner who vacations at Troy and somehow gets onto the wrong side of the Internment Fence, gives her best performance since Mother Courage.

The play’s innovation is Lotte, a tourist who wanders into the refugee camp of The Trojan Women. This can work really well. For example, we meet Helen – “Just Helen” – who wears an amazing dress, bribes the guards for soap and Tylenol, and despises the silly women in the tents “who just have to have their Tragedy.” I think this isn’t quite developed, but it’s not difficult to see where it might go. Beyond Rangoon is one terminus. So, I think, is The Year of Living Dangerously. 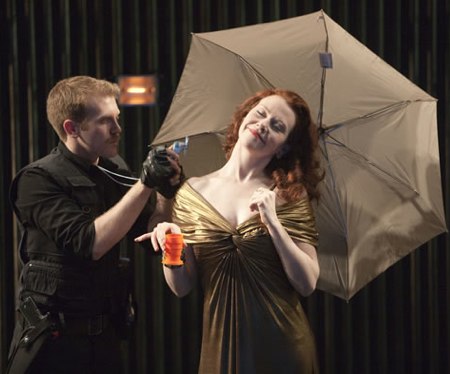