Energy in the Blogosphere

Bloggercon I was about energy. It was, above all, an energetic meeting -- lots of enthusiasm, lots of idealism, and boundless ambition.

The weblog, Chris Lydon argues, is something Emerson would have seen as uniquely American. But it's not uniquely American today because -- in this sense -- we have now all become Americans. Openness to change, individuality, and distrust of arbitrary superstitions and borders were distinctly American once, just as the rights of man were, once, distinctively French. Freedom fries, not potatoes dauphinoise.

The weblog world is also a great believer that it will muddle through whatever the world throws at it, and Bloggercon really, deeply, assumes that if you just trust all the people, good things will happen. Lies spread quickly, but the truth, they say, catches up even faster. I worry about what the blogosphere would have been like, if they'd all had weblogs in 1938; Leni Riefenstahl would have made a great chief blogger, and Nikita Kruschev's war journal could have generated amazing flow. But this concern gets no traction; people figure it will work out, and that the new world will be better. Nor are people very worried about power law distributions of audience.

Same story with money. Bloggercon-ers agree that the weblog world has lousy economics now. People agree that the economy is more complex than it seems, and probably that "it's even worse than it looks". But there's lots of economic energy in the room. There's Esther! There's Amy Wohl! And, if Greenspun (who is not hurting for lunch money) wryly notes that, for all his traffic, his site earns about $400 in Google ads, everyone smiles and assumes that we'll work this out, too.

Money doesn't come first to the BloggerCon audience. They're not starry eyed: there are a lot of people in the audience who've made a lot of money by creating very challenging and technical businesses. But money isn't the point. And that, as Dave Winer observed at the outset, is priceless.

Contretemps breaks out when Esther Dyson asks whether the weblog comments feed into policy discussions, and Graham's weblogger answers, half-jesting, that policy doesn't matter. Blogs generate buzz and the impression of activity, he says, but my guy has the best policy and he's way behind in the polls.

Winer almost outraged; isn't this what we're building to overcome? What happened to the hope of the previous session?

Interesting: you can download a Dean Weblog Community Kit. Clark will have one, too, says Cameron Barrett, Clark's head blogger.

Key problem: too many comments on a single post. Answer: get people to start weblogs.

Another problem: Ed Cone says, "My senator, John Edwards, is a great communicator and his weblog is terrible." Responses: the weblog has to be genuine, personal, and immediate. Matthew Gross (Dean) says that one key is not having a committee. "In the blogosphere, an hour is a long time."

Part of the beauty of weblogs is that they are without economic foundation, that they are the product of love and passion -- Scott Rosenberg

A nice point in a long discussion of "weblogs as force for collective wisdom" and "weblogs as the second superpower": what the blogosphere may be is the coffee house of a new enlightenment.

Is Dave Winer the new Samuel Johnson? Is Pepys the new Pepus?

Bloggers interested in education really need to read Hypertext 2.0 by George P. Landow. He did a fine job of addressing concerns about "digital paper" and its potential strengths and weaknesses; many of the questions raised in the Blogging Education panel are answered there -- most especially Philip Greenspun's excellent (but answerable) query about constructing long arguments and writing in long forms.

Here's just the education section of my notes. (Click here for full size)

In the education panel, Lance Knobel makes a nice point about student writing. Turning in essays every couple of weeks, written for just one reader, eventually becomes a problem. Weblogs, offering the potential of a public audience, offer writing with consequences.

AKMA, too, talks about the same problem with theology students. What happens, they worry, if something they write upsets their bishop? Their tenure committee?

Perhaps the most interesting point in the journalism panel was Reynolds' assertion that blogger-journalists may have the greatest impact in local politics, that blogs may revive local concerns.

It's not about mass audience.

Dave Winer is very worried about the media's coverage of media. I wonder if, in this respect, the blogosphere will come to play the role formerly occupied by the newspaper bar. Once, if you wanted to know what was going on inside a paper or a magazine, there was always a bar where, everyone knew, you could get the dope. The Algonquin, or Ricardo's.

Here's my (empty) Tinderbox at the start of Bloggercon.

Charlie Bennett writes, “It started with a typewriter and a knife…and a girl. Always a girl, I guess.” 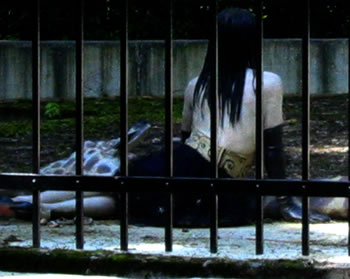 Walking through an urban park in a Dutch city, we happen upon a stylishly goth young woman, comforting a giraffe. "There must be a story here," we tell ourselves. And there is -- but no sign tells us.

People find narrative. That's what they do. Relax, help if you can, go on about your work.