In one section of the NeoVictorian talk, I talk about the Romantic strain in programming, reflected in our tales of the age of heroes.

In the beginning, so our myths and stories tell us, the programmer created the program from the eternal nothingness of the void. Whether it is Stallman typing teco macros and wearing out the shift keys; Chuck Moore typing backwards at Kitt Peak; Goldberg, Deutsch, Robson et. al. in the parclands of California; billg hunched over Allen’s Altair emulator; Bill Joy’s VAX crashing and deleting vi multibuffer support for the next ten years; Gabriel doing The Right Thing at Lucid; or Larry Wall doing whatever....' -- Biddle, Martin & Noble: No Name: just notes on software reuse'

Here's one of the slides from the sequence, showing Guy Steele (the keynote) and Doug Engelbart (the demo). 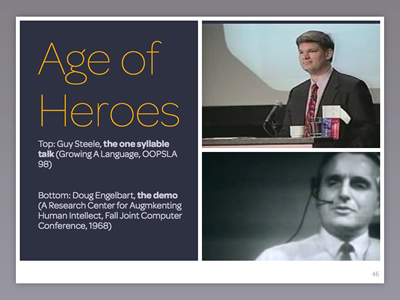 There was one thing I didn't expect: that I'd eventually find myself reprising this talk at SRI, in the building where Doug Engelbart built NLS/Augment and so much else, with Engelbart in the audience.

Small world, an honor and a privilege.