Game developer Zoe Quinn has just published a lengthy and generous exploration of Gamergate and Journalism, Let’s Talk About Ethics – No Really!. Readers will recall that Quinn was the original Gamergate target. 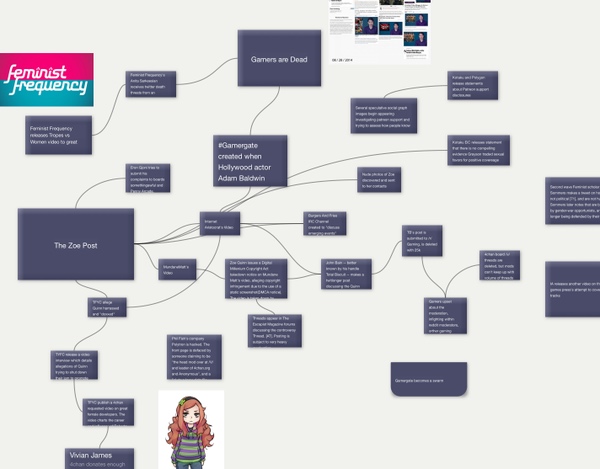 Stacey Mason is starting a study of Gamergate’s history. Above, see a part of her Tinderbox map of the origins of Gamergate.

Over at Wikipedia. Brianna Wu’s page is now the arena of renewed edit war today, as single-purpose accounts attempt to insert suggestions that she lied in reporting threats of rape and murder, or that she sent the threats herself. A proposal to recast the Gamergate article itself as an open question – misogyny or ethics? we report: you decide! – will continue to unsettle the talk page. Ardent efforts to discuss a job that Anita Sarkeesian might have had ten years ago appear to have stalled for now; look for a change in weather and a new storm front. Gamergate continues at ArbCom (16,700 words so far, another 10,000 on the talk page), at General Sanctions, at AN/I (two open complaints), and AN (just closed).