The Souls Of Black Folk

A sensible and very moderate book, once considered radical but now filled with good and gentle sense. Du Bois is hard on Booker T. Washington, and the early placement of his essay on denouncing Washington is perhaps not ideal, yet it’s now clear that Du Bois’ vision is the one that prevailed. The audiobook is narrated by Mirron Willis in a cadence that we can now say recalls the best speeches of our president; Du Bois would not have been astonished.

It turns out, there have been nerds for a very long time.

I'm reading Bloody Mary’s, Geoffrey Dennis’s 1934 account of being a British schoolboy in the 1890s.

There's a diversion about Special Local Knowledge that all the boys acquire from each other at school, and one of their fascinations is that, even in the 1890s, Yorkshire shepherds had a separate system for "scoring" sheep. (Scoring, I presume, because you want to know how many score of sheep you have, rather than to know whether the sheep are winning.)   The numbers are:

So sheep #5 is Pip, #10 is Dick, #15 is Bumper, and #20 is Jigger.  Is that why Jack Aubrey calls a full glass (“A toast! Bumpers all round!”) a bumper?  They’re not all nonsense words, either; "pip" is apparently derived from Welsh pump. It’s not just one mad farmer’s habit, either; variants of the system have been collected from Yorkshire, Ireland, and (!) Ohio.

See also costermonger’s back-talk, which is not the sort of back-talk your mother warned you against.

Update: I am informed that school boys today still revel in these counting systems. Can’t blame them. Also, a variant of “Cattera, Hona, Dick” – eight, nine, ten – is, apparently, “Hickory, Dickory, Dock”, which everyone knows, and especially the mouse.

Over on the Tinderbox Forum, a new Tinderbox user finds the size of new notes in map view to be too small. How can he change this without individually resizing every note?

There are probably additional answers! Note that each of these does something distinct; today you may want one, but tomorrow you'll want another. 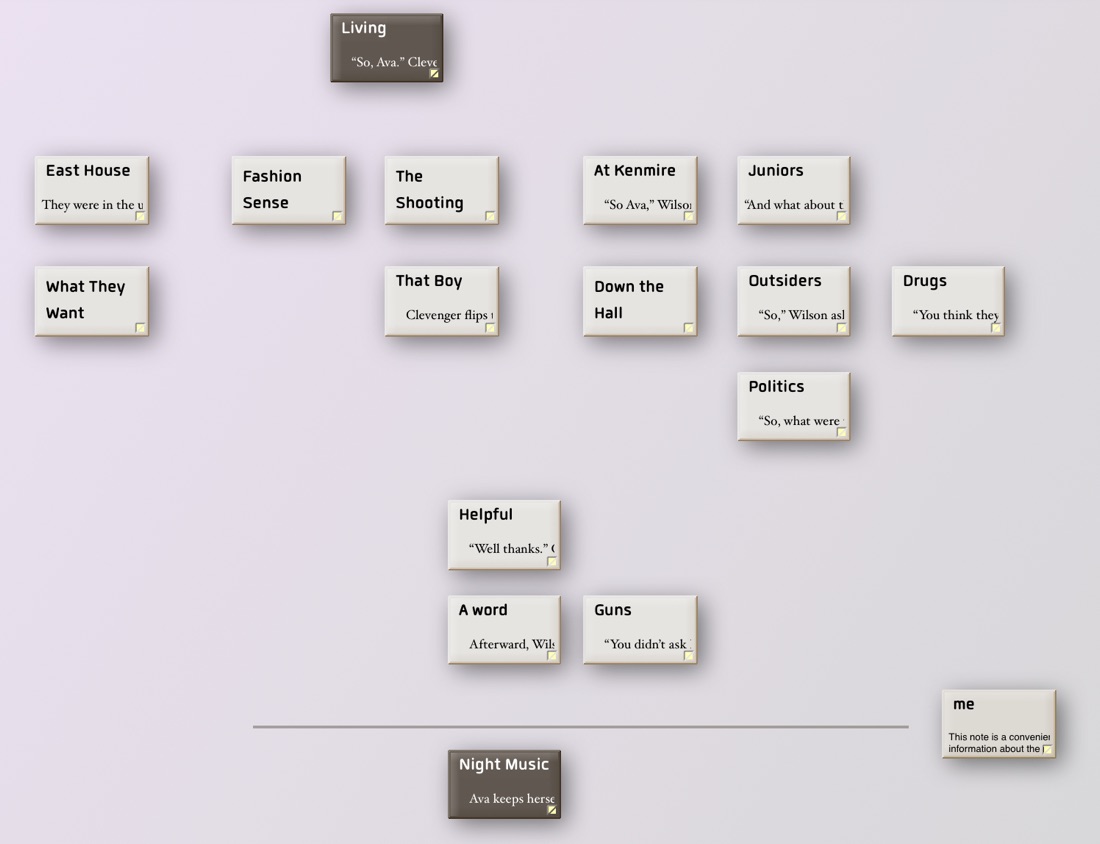 It’s sometimes important to remember that these maps are almost always a means to an end, and that end is understanding, not making a map that you can hang on your wall.

A skillful and effective reflection on fighter pilots in the era of the Korean War specifically, and on the tribulations of a thoughtful, adult soldier who finds himself surrounded by pilots who are often childish, greedy, and unthinking.

Many Storyspace users will be interested in this year’s Narrative And Hypertext workshop at Hypertext 2016. It’s on July 10, at Halifax, NS. The Call for Papers is here; Charlie Hargood is the organizer.

This year, Hypertext 2016 will also have a Creative Track, chaired by Stacey Mason.

Mozart In The Jungle

If you avert your eyes from occasional lapses and intermittent idiocies, this series has some very well observed scenes about the intersection of art and commerce.

A superbly handled school mystery that ably captures the weirdness of adolescent society. A boy from a nearby school was killed last year, with a hoe, in the grounds of an adjacent girl’s boarding school. Circumstances limit the suspects to eight girls – two sets of four roommates. The two sets detest each other, everyone dislikes the nuns who run the place, the investigating police officers neither like nor trust each other.

Formally, this is only barely a mystery (but, then, neither is The Maltese Falcon), and to the extent that it is a mystery, it suffers from the multitude of plausible suspects. There’s a solution, but it scarcely matters; many of the alternate suspects could have been made to turn out to be the culprit. But we don’t care about that: what we see here, and what’s done with wonderful skill, is the way everyone (including the two investigating officers) manages, in the end, to grow up.

Fear and Loathing at Rolling Stone

A collection of Hunter Thompson’s famous articles, mixed together with correspondence and editorial reminiscence. The man could write. When these were first coming out, I couldn’t work my way around the persona, and I couldn’t quite believe the persona. Today, in Trump’s World, the fear and loathing seem perfectly sensible.

Reviewing the bidding, Tinderbox’s date conversion routines sometimes were sometimes off by one day when entering dates in the 19th century and earlier. The precise date before which the error is observed varies for different customers, from a date in the 1840s to one in the 1880s. The error is completely consistent when you observe it, but doesn’t affect everyone all the time.

What on earth could explain this?

The Answer. Tinderbox dates are points in time. When you say, "July 4, 1776," Tinderbox needs to choose some specific moment on that date. Some programs choose an arbitrary time -- noon, say. Tinderbox chooses whatever the current time is.

But there was one thing they had forgotten. The current time depends, of course, on your time zone. Internally, dates are stored in Universal Time, but you don’t care about that. So, we do a simple two-step:

But, back before they invented railroads, there were no time zones. And OS X knows this! So, before time zones were introduced, the local time doesn’t get shifted to the time zone. And, if your local time is one a different calendar date than Greenwich, you’re off by one day!

Once you see this, it’s easy to fix. When you’re looking at a page full of CFDateRefs, it’s harder to see.

It wasn’t that long ago that you couldn’t enter a date before 1904 on a Macintosh.

Update: And here are the rules for Time Zones, thanks to Tom Harrington.

This haunting tale of Agnes Magnúsdóttir, a condemned murderer in 1829 Iceland, was much-discussed at Readercon. Kent does a wonderful job of world-building, crafting rural Iceland’s remote and cloistered society with effortless skill that recalls the first impact of Wolf Hall. This is a world where medieval horror still lurks on every doorstep, where the nearest neighbor is too distant to save you in case of fire or sudden snow, where letting the fire go out may well be a fatal error, a place where condemned prisoners can be sent to rural farms to await execution because it’s cheaper than keeping them in jail and, even if they ran, they’d simply freeze or starve.

A Word About Dates

Tinderbox dates always represent a moment in time. When you type a date like “February 3, 2016” into Tinderbox, the program supplies a specific time by using your current clock time. At worst, this is arbitrary but plausible; if you cared about the time, of course, you’d enter the time. Some edge cases work well this way, too: the date “yesterday” is 24 hours before now.

This causes trouble, though, for historical dates – dates before the introduction of time zones and the International Date Line. As I understand things, each locale knows when time zones were legally introduced; before that date, times are assumed to be Universal Standard Time. This means that, for at least part of the day, when you type "February 3, 1776,” you’ll get February 2.

There must be a better way. Anyone know?

A Word About Length

The short story lived on – lives on – as a way to write fiction because teachers need to grade student work, and nobody really wants to read forty student novels. People seldom buy short stories – not even in collections: not, in any case, if you compare their audience with the audience for novels, much less television screenplays.

The same concern poses a challenge for new media, a challenge that distorts the literary landscape. I’ve never been completely convinced by Janet Murray’s contention that digital media are intrinsically encyclopedic, but many writers have been convinced, and their teachers don’t want to read a whole encyclopedia before handing them their A-. They especially don’t want to read a different encyclopedia for each of a dozen or two dozen students. And if, as is increasingly common, the instructor is an adjunct or a teaching assistant, they especially won’t want to read all those encyclopedias for $100-$300 apiece -- not with a couple of dozen class meetings thrown in.

But how can we create small, gradable new media works?

One approach, digital storytelling, focuses on crafting 3-5 minutes of personal memoir. There’s not much research to do: you know your past. Cinematic convention provides a narrative framework, and the miniature compass precludes most problems of plot and story.

The hypertext short story has been attempted quite a lot, and has succeeded occasionally. Mary-Kim Arnold’s “Lust” and Kathryn Cramer’s “In Small and Large Pieces” come to mind, though Cramer’s work isn’t all that short. “A Dark Room” is that short, and fills itself out through engaging the reader in a trivial side game, something we tried, wrong-headedly, with Sarah Smith’s King Of Space. Geoff Ryman’s 253 is large, but perhaps need not have been; 253 is not the perfect cast size, it’s just the number of people who happened to be on that particular train.

The problems of hypertexts that are small enough to grade and yet large enough to take seriously, to teach us something we want to know, to be held up as examples in conferences and to be discussed by weblogs and journals, is real and pressing.