This insightful local history of Malden MA, an early satellite city north of Boston, focuses on the city’s ethnic groups and their attitudes toward The Great Depression. Klaymann’s central character here is Malden’s Jewry, whose arrival he chronicled in his earlier monograph The First Jew. These are, to my knowledge, the only social histories of modern Malden .

Malden began as a colonial-era village. In the mid-19th century, it became a moderate industrial center with a major rail line and big factories making rubber shoes, gym shoes, dyed fabrics, and furniture. A retail center flourished in Malden center with homegrown theaters and department stores. From the beginning, Malden had a tiny Black community down the road in its 7th Ward, and when Eastern-European immigrants began to arrive in the late 19th century, lots of them moved into that quarter of the town. Jews weren’t averse to Black neighbors, and other immigrant groups, notably the Irish, often were.

Malden’s Depression-era conflicts were essentially ethnic. Yankee Protestants ran the Republican Party, but were declining in numbers as wealthier members moved away from the city. Irish-Americans ran the Malden Democrats, who even today meet in the Irish-American Club even though that club has never had a Black member or a female officer. Much of the Irish agenda was focused on preserving their dominance, typically by opposing the aspirations of the growing Italian-American community in its Ward 2 enclave. Throughout, Malden High was racially integrated but reserved class offices (and major roles in extra-curricular activities) for the offspring of Yankee Protestants.

Malden’s large population of Jews shlepped through the Depression. The kids often did well in school: so well, in fact, that community opposition to academic excellence became a movement. When the WPA planned to build a big and greatly-needed new school, the city dithered for years over the question of whether it should be beige or brick. The Jews didn't care about the color.

The Depression created a tight-knit Jewish community but carried the seeds of its dissolution. Immigrant Jews had accents and knew a world of pogroms; their kids didn’t. The kids did know Father Coughlin, an anti-semite with a vast American following; Malden was riven by a long struggle in the 1930s to get the Public Library to stop circulating the Protocols of the Elders Of Zion, which was in great demand. The immigrant generation built delis and shops and tenements, but the Depression deferred maintenance and redlining suppressed values and the kids moved to newer, nicer suburbs. The old Suffolk Square tenements were removed for urban renewal. The communitarian values of the old community survived, but were antennuated by the failure of Debs-style socialism in the 20s and by the enfeeblement of New Deal socialism in the wake of Nixon and Reagan.

The roots of our current miserable political predicament are deeply buried, but that misery and its correction are exclusively our responsibility.

Alexis Kennedy provides a remarkably complete and transparent view into the first year of his new game studio.

Eastgate’s not a game studio, but we’re not bigger than Kennedy’s Weather Factory. A few things leap out at me. 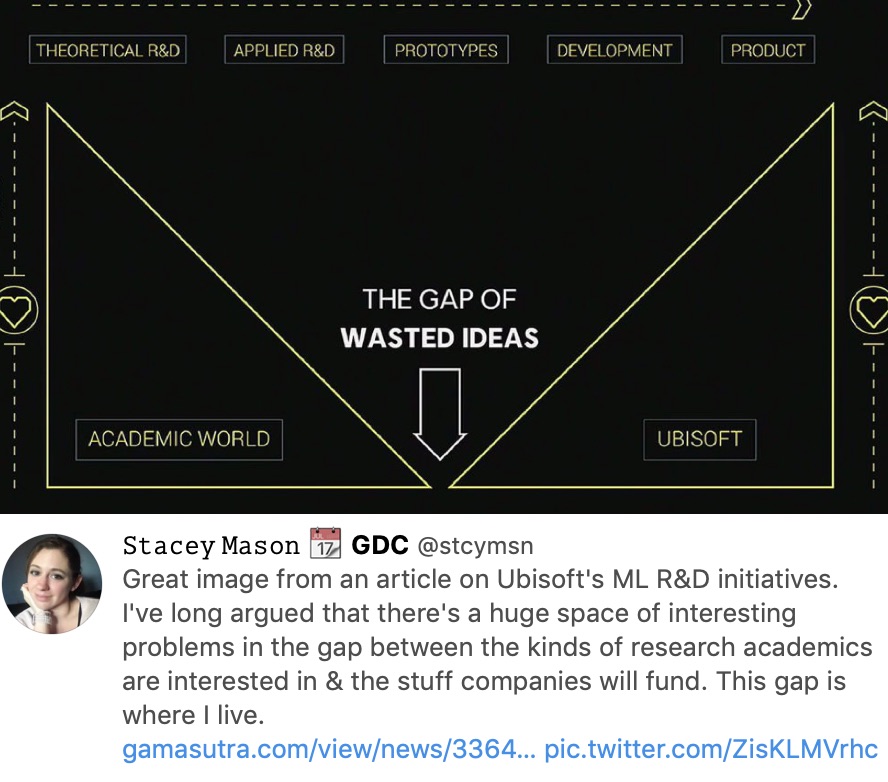 Imagine a university film society in the 1950s, at a place where there was lots of interest in Cinema. Those people would be delighted to talk about Bergman or Goddard or Kurosawa. They’d have read last month’s Cahiers du Cinéma and would have strong opinions about it. Some of them would have read next month’s Cahiers, too. They would travel and wait in long lines for a chance to see The Bicycle Thief or The Philadelphia Story, because you couldn't stream and and you couldn’t rent.

This isn't my experience of academic game studies.

Fascinating videos of one scientist’s approach to capturing reading notes.