Photographer Richard Chase has a terrific weblog. Today, it's about Frankie.

I was rarely sure who was going to show up at my studio when we were scheduled to get together. Frankie can be more than withdrawn. During our first several sessions, there were times when she was so unresponsive even to casual conversation that I had to wonder if she was alright. And when she became present again, she was be defensive, manipulating, and angry -- or shy, unsure and easily embarrassed. It took some getting used to, but I like roller coasters and very quickly among those many mood swings I found someone who became one of my most cherished subjects. She never came to the studio as anyone but herself, and she always let what her life at the moment was come through. It's not possible for me, as a person or as a photographer, to ask for more. 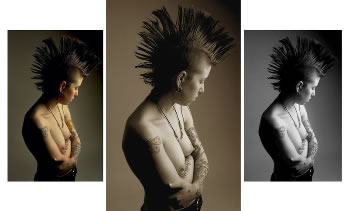 Read the entire essay, and be sure to click on the images. Chase makes huge prints; the tiny Web thumbnails don’t give you a clue.