Collin, who grew up in Cambridge and dropped out of art school, is waiting tables at Grendel’s Den. At one of his tables sits Nina, who grew up in a better part of Cambridge and who is now doing her best to teach high school English Literature. Collin draws a fast portrait of Nina on his dup pad. They fall in love. It turns out that Nina’s father and uncle run an immensely successful game studio that can always use a great new artist.

Aidan is nominally in Nina’s class, but he spends all his time playing the wonderful new beta of EverWhen, called UnderWorld. In EverWhen, he’s a powerful water elf and he doesn’t have to memorize Emily Dickinson. His twin sister Dianna wishes people would stop looking at her all the time, and also misses her brother. Their Mom, a nurse, thinks it’s basically an addiction. And then there’s the mysterious Daphne, the secret EverWhen marketing guru who is infinitely lovable and who recruits teenage boys to graffiti their school with the tag CU, alluding to the launch slogan: UnderWorld: See You In Hell.

Goodman, whose Intuition is the best description I know of what research is actually like, captures the dream of gaming perfectly here, the sense that there’s a second world where things matter differently.

She was a Tree Elf named Riyah. He was a Water Elf, Tildor. They came from different realms, but for the past three nights they’d qwested, traded and killed together. They had hunted basilisks, slain dragons, and retrieved two diamonds, which Riyah carried in the bag hanging at her waist. She was an amazing marksman, and beautiful, even for an Elf, her eyes huge, her body supple. Her breasts swayed as she ran, her quiver bouncing behind her.

All this gets interrupted when his mother demands, “Do you know what time it is? Do you even know what day it is? Aidan? Look at me when I’m talking to you!” This is a fascinating book about representation, and also a ton of fun.

A beautifully-wrought story about some Manhattan girls, out on the town at the end of the Depression. Katey Kontent (!) and her roommate pick up a wealthy young stranger in a second-rate nightclub. He falls for Katy, ends up dating both girls, and then drives into a messy accident that makes their romance impossible. Naturally, that’s far from the end of the story. Katey turns out to be more resourceful than we knew. The book has a wonderful sense of place, with a nice knack for how new the past always seemed. Seeing Carrie Clapboard, a young beauty at a track with her tycoon fiancée, Katey receives some friendly advice from an older woman. “I were your age, I wouldn’t be trying to figure out how to get into Carrie’s shoes — I’d be trying to figure out how to get into Jake’s.”

A collection of club stories by the author of Greenmantle and The 39 Steps. Lots of familiar material in Buchan is familiar because he wrote it first and then everyone re-used the story material; even when you know where things are headed, these genial stories are good fun.

I read them because I want to understand framing stories. You’d think that frames would make stories less exciting; for example, you know that Marlow survives his adventure in the Heart Of Darkness because here he is, on the deck of a yawl becalmed in the Thames, spinning yarns for the Director and the corporate Attorney. Yet Conrad’s story certainly moves. So do Sherlock Holmes’s Adventures, and they’re pretty thoroughly framed as well.

Buchan has a knack for letting the characters who told previous stories offer remarks and advice to those who come later. Again, that’s a trick you wouldn’t expect to work. It does.

Published in 1928, this is also a memoir of the very last moment when London could view itself as the absolute center of the modern world, a place where the good fellows at the club were only resting from labors that might include leading a regiment, spending years behind enemy lines, negotiating a treaty, writing a new edition of Quintillian, or becoming a revolutionary Muslim prophet.

I’ve got a few queries for my colleagues.

Travel and food tips for Prague are also most welcome! Want to meet up? Email me.

Hypertext research has been deeply interested a narrative, and literary hypertext fiction has enjoyed a long and happy relationship to this conference. The literature of Critical Theory, on the other hand, is famously opaque, and our Balkanized technical literature on new media storytelling has grown provincial.

Daring yet accessible experiments in non-sequential interactive narrative have appeared in unexpected places – in theaters, in experimental novels, and especially in narrativist role-playing games. These narrative automata exhibit considerable sophistication in the frame of simple models of computation. Much of this work is a lot of fun while demonstrating remarkable theoretical depth. In contrast to the cheery hero journeys through depopulated landscapes that long dominated computer games, this work is notably dark, emotionally complex, and introspective.

The summer festival of artisanal software is under way. Lots of great professional software for writers and thinkers, all at terrific (but sustainable) prices and all 25% off. 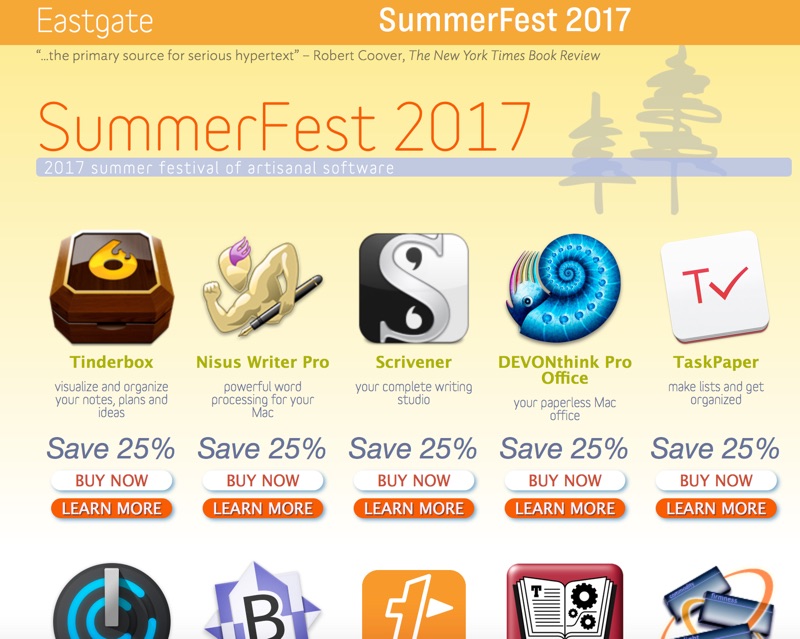 A Harp in Lowndes Square

An impressive experiment that approaches magic realism, in 1936, written with style and sympathy. Vere and James Buchan are twins. They have an older sister who, they quickly learn, is not as bright as they; in time, they appreciate that there’s something wrong but don’t know what. Their mother, a widow, is unhappy and unreliable; their grandmother is clearly a monster, but that doesn’t really explain anything. Something very bad happened in grandmother’s house in Lowndes Square, long ago; now it’s 1916 and Vere, a modern girl, is determined to find out.

A lot of this is very well done. Vere and her twin brother are immensely engaging. Vere gives us buckets of exposition, but they're so sweet and true we don’t mind. And then there’s the element of Fantastika, the bits of magic realism that float through Vere’s London.

Rachel Ferguson would eventually become a reclusive and bitter conservative, and here already you can see the seeds. Vere likes the theater and she likes actors, and we wind up with a big set piece deploring the state of the stage generally and the decline of musical comedy specifically from its late Victorian heights. This novel was published in 1936; in the years immediately before, New York saw the first run of Porgy and Bess (Gershwin), Anything Goes (Cole Porter), Face The Music (Irving Berlin), Ziegfield Follies (Josephine Baker), and Jumbo (Rogers and Hart). Harburg and Arlen wrote “It’s Only A Paper Moon” and much else. In London, Rise and Shine had Fred Astaire, Noel Coward’s Tonight at 8:30 was at the Phoenix, Ivor Novello would open in Careless Rapture. The theater is always in trouble, but if this era makes you go all James Forsythe, the problem isn’t on stage.

But that’s just a cloud on the horizon; Ferguson is largely forgotten—I found this through a review in TLS premised on her having been forgotten—but Very and James are exquisite. 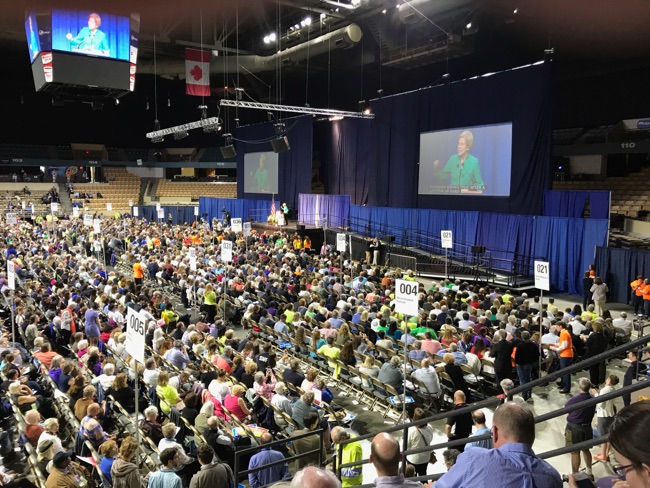 The Mass. Dems had their convention this weekend. Ed Markey told us again that “Democrats don’t agonize, they organize.” This was always untrue, but this year it’s preposterous.

Hint to Democrats: when you’ve got an audience of 5000, committed and active and almost all of whom have paid good money and gotten elected in order to be delegates, respect them enough to tell them something new, fresh, and important. And no doubt it’s a dandy thing to represent Worcester, but really, once is enough.

A skeptical but intelligent survey of postmodern thought. Butler assumes that postmodernism is over and concludes that, overall, it lost its argument with liberal realism while teaching important lessons about gender, identity, and power. He is, interesting, quite sympathetic to postmodern literature while clearly well out of sympathy with much postmodern art; I’d have liked a bit more discussion of architecture and (especially) cinema, where Louis Menand’s article on Pauline Kael seems very much at odds with Butler’s emphasis on politics rather than anti-formalism.

This is one of the great mysteries of the 20th century, and perhaps one of the most enigmatic. A dying old man, a former general who made money in oil and who had daughters far too late, believes he is being blackmailed. His elder daughter is working on her third divorce, and the general rather liked son-in-law #3, a rakish mobster whose thorough unsuitability rather appealed to the general’s humor. A plot-driven adventure that, characteristically for Chandler, pays remarkably little attention to the details of plot; everyone cares deeply what’s going on right now and they behave as if everything makes sense, and we go right along. A brilliant portrait of the America that bred Trump.