The Vatican Museums own the world's great collection of classical art. For centuries, the Pope had preemptive rights to new discoveries, and sometimes whatever the Pope didn't want was destroyed. More recently, the collections at the Lateran have been moved to the Vatican too. 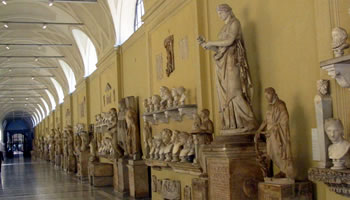 Here's one amazing view, looking down one corridor of many. The best fragments of a lost world, set out in endless array. But notice, too, that there's no signage -- no labels, no handcards, no supporting material. If you aren't already a world expert, I suppose, then the people in charge feel you don't need to know. 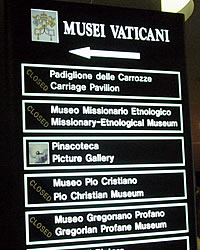 Notice that signage isn't the only thing missing from the picture: there are no people. Most of the collections of ancient art are closed. Nobody seemed to know when, or if, they'd be open again. You might assume a staff shortage, but then again they have enough staff for about a dozen gift stores and souvenir stands that fill galleries between the entrance and the Sistine chapel. (And, if times are tough, I suppose the Vatican could forego some of the lobbyists they've hired to outlaw same-sex marriage benefits in my hometown and employ a few extra guards. Or raise ticket prices even higher)

Of course, the Sistine chapel is a problem for the Vatican, just as the Mona Lisa is a problem for the Louvre: the museum has to deal with a stream of tourists who have come just to spend a moment in the presence of The Famous Thing, to purchase some evidence that They Were There, and who then want to rush off to the next marvel. The Vatican Museum makes great efforts to accommodate these people, and does what it can to guide them. It's learned some lessons from Disney -- keep the line moving, lead people to expect even longer delays than they'll experience, give them stuff to look at as they shuffle down the corridors but keep everything focused on the E Ticket Experience. 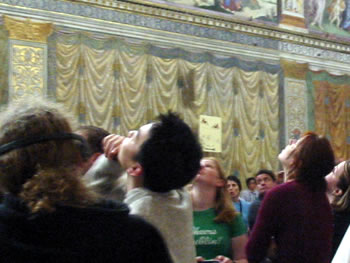