Last Saturday, we found ourselves in the midst of a huge anti-war demonstration in the center of Rome. It's been a long time since I saw the streets filled with happy people, protesting a war because nobody is quite certain why it got started.

The Peace Flag, it turns out, makes a really nice skirt.

The hammer and sickle, it turns out, is still useful iconography in Italy. There were lots of red flags. But there was surprisingly little anti-Americanism -- not that we noticed, anyway 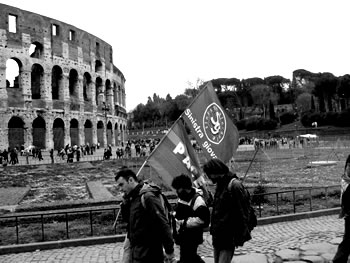 The Carabinieri and the Polizia and who knows what other security forces were out in force. In Italian, a police station is a questura; when the building in the background was new, the officials in charge of things like routine law enforcement and games were called quaestors.