We saw Marlowe's Dido: Queen of Carthage at the ART. A really fine production; Colin Lane does Aeneas with a slightly Australian flavor that's exactly right, and Diane D'Aquila's Dido is terrific.

It's an astonishing play, when you think about it, for a twenty-one year old guy. I mean, Romeo and Juliet is about kids, but Dido is essentially a play about middle age, about having responsibilities, about knowing better but maybe losing your head. Or your mind. It's about loving people who have things to do and places to be, which is not exactly what you'd think teenage Kit Marlowe would be worrying about.

The ART has, over the years, engaged in several long-term projects. We've seen just about all of Ibsen, for example, and almost all of Brecht. That's nifty: I certainly wouldn't have chosen Ibsen at the outset but I'm happy it's worked out that way, and who knew that my favorite Brecht would be In The Jungle of Cities (Im Dickicht der Städte) with its bizarre view of Chicago?

Theater and blogging are difficult companions. You can't go see In The Jungle of Cities at the ART, because it closed six years ago. You can't go see Dido, either. You're wildly unlikely to be able to rush out and see a different production of either of these plays; even if you live in a great theater town like London or Moscow, these are almost never performed. You aren't a director or a producer, so even if my opinions hold water, there's nothing you can do about them.

I think there is a point in this, a point that has something to do with keeping new media connected to its roots in theater and performance. More practically, people who think seriously about theater have had a lot of time to think out the puzzlements that surround our newly dubious and doubtful relationship with narrative and plot. In game design, for example, the virtues and vices of plotlessness are big news, and the big production numbers are everybody's big talking point. Theater's been doing this since Ionesco; we ought to be able to learn something.

But it's a close call -- closer, really, than the cheese sandwiches even though the newspaper people are less likely to poke fun at your weblog posts on Elizabethan drama or Brechtian despair. 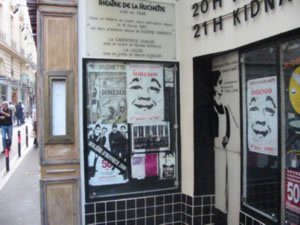