Six years ago, I wrote:

Dearest Meg,
It isn’t going to be what we expected.

What a fine way to start a story. And what a fine story! It makes an interesting pairing with Galsworthy; The Man Of Property was published in 1906, four years before Howards End.

Visiting the lovely house of an English friend reminded me of Howards End; even if they don’t have a mystic wych-elm, their garden is long and lovely.

Safer than a Friend

A fun book to reread while visiting a English friends far too long neglected. Yes, perhaps the scholarship does come too easily, but then again it’s that kind of book.

I’m working on a hypertext fiction, a school story that draws on The Trojan Women.

I’m using Tinderbox to keep track of the characters, and I honestly wonder how anyone manages to do this without something like it. Here, for example, are notes about roughly half the characters involved in just one chapter, which describes a summer party at a country house. 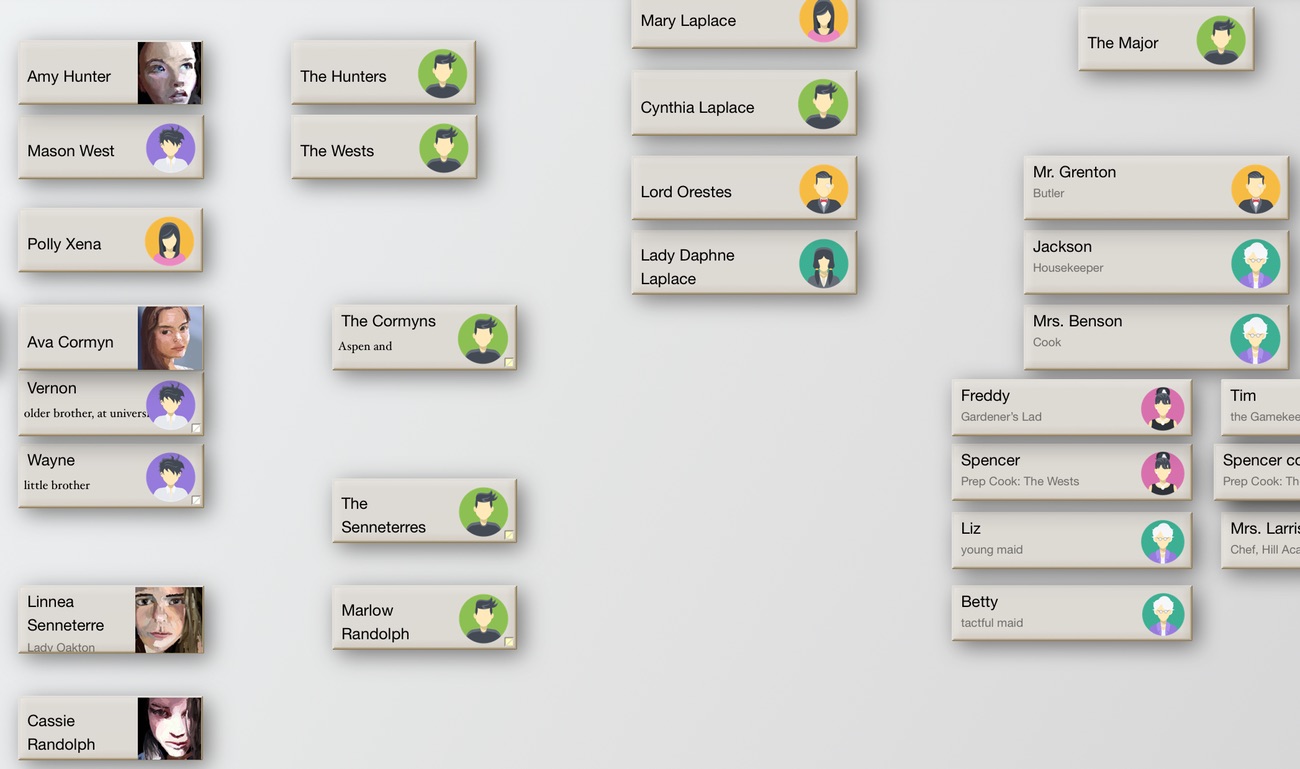 This isn’t a grand wedding or a ball: it’s the late-summer weekend when our parents always invite their friends who have kids in school with us. So we’ve got six or seven kids from school, some of their parents, and a few parental friends and relatives. Some of the kids have siblings in tow, of course, and one family has an au pair. We’ve got staff, too – just enough to be convincingly grand and to provide a little upstairs-downstairs political tension: butler, cook, caterer, the gardener’s lad.

To write this at any reasonable speed, I need to know what commitments I’ve already made. If Linnea’s mother is “Vic” in one scene, she ought to have the same name later on. If Cassie’s mother died several years ago, she’d better not appear at dinner. If the butler at the door has gray hair, he ought to have gray hair when he’s serving the port.

An obvious difficulty with writing about young people is that young people don’t have much freedom of action; it’s hard to solve a mystery when Mom is always telling you to come in for dinner and to finish your homework. That’s one reason that YA stories have so many orphans and boarding schools. But there’s a limit; at one point, I realized that about half the class was missing a parent. Now, we can do that if we need to, but we’d need to explain it and to sell it. If all you have are brief mentions in exposition concerning minor characters, though, and they’re spread across hundreds of pages of text, it’s hard to notice the problem at all. Review the character notes, though – perhaps to decide which classmate will serve as The Messenger in a scene – and the problem is obvious.

I suppose one could fill out character sheets with everything we’d ever want or need to know about each of these characters, but that would waste a lot of time. I’m not eager to write stuff that I know will never appear in the finished work: I think this house party is needed to get our characters on stage and to establish The Coming Revolution, but I worry that the whole thing may wind up on the cutting room floor. Anyway, minor characters are minor; I don’t need to know everything about the gardener’s lad, but I do need to be sure he’s not Tommy in the morning and Billy after lunch.

I suppose one could do that with a notebook or a file drawer, but that feels like a lot of work.

How do people manage?

Shylock Is My Name

This fascinating novel of ideas begins in a cemetery where Strulovitch, a man of some importance, recognizes an even more notable banker. Shylock is sitting on a stool, reading Portnoy’s Complaint to his late wife.

Strulovitch invites Shylock home for a visit. Shylock, he knows, is a divisive figure: “No two people feel the same about him. Even those who unreservedly despise him, despise him with different degrees of unreservation.”

It turns out that Strulovitch and Shylock share a long history of trouble with their daughters. It’s not the ducats that Shylock minds, it’s the daughter. And it’s not so much losing the daughter as that goddamn monkey. More pressingly, Strulovitch’s sixteen-year-old Beatrice has run off to Venice with a football player who has a thing for very young Jewesses.

They have troubles to talk about, these two aging Jewish intellectuals. “There’s nothing good or bad but thinking makes it so. Our greatest weakness as Jews is forever to be thinking the worst of ourselves.”This is part of The Hogarth Shakespeare, a series of commissioned novels that revisit Shakespearean plots. Impending treats include Margaret Atwood’s Tempest, Anne Tyler’s Vinegar Girl, and Jo Nesbø’s Macbeth.

Shylock Is My Name takes its questions seriously. Shall we not revenge? Why not? The quality of mercy, after all, has always been strained.

They walked the rest of the short distance to Strulovitch’s hearse-like black Mercedes in silence.

“Ah! I’m surprised,” Shylock commented when he saw it. A black chauffeur was holding the door open for them. Strulovitch handed him Shylock’s Glyndebourne stool. “In the boot, Brendan,” he said.

To Shylock he said, “Surprised by what? That I have a driver?”

“That you have a German car.”

“I thought you believe we have to draw a line.”

“That’s another sort of line.”

“A line’s a line. We must let bygones be bygones.”

“I’m surprised you believe that.”

My fantasy baseball rivals Henry Olsen and Dante Scala are burning up the political wires this year.

Wondering yesterday about whether it is precisely right to say that “Caesar’s armies swept the armies of the Republic before him,” I was struck by how hard it is to find anyone like Donald Trump in our political stories. The mixture of ignorance, carelessness, bombast, combativeness, vanity, and bad taste cannot be unique, but where in all our stories do we find anyone at all like this?

Perkin Warbeck? Richard II? I suppose you could make a case for Marlowe’s Edward II, but Edward doesn’t especially want to be king, he simply is king and there you are.

When you have to reach this far, we’re deeply into uncharted territory. We’re hip deep in the Big Muddy…

A Dirda-recommended mystery from the 1980s and one of the most influential mysteries of its era. Hoke Mosely is not, perhaps, an ideal cop. He’s tough and smart, but only within limits. He’s not Raymond Chandler’s man who must walk down these mean streets alone, and he’s up against a casual psychopath who is, for the time being, out of prison and who takes life as he finds it – and then helps himself to whatever he can grab.

Fascinating introduction by Elmore Leonard who notes, correctly, that Willeford and he are working on the same thing.

The Gate Of Angels

Penelope Fitzgerald visits David Lodge territory and returns in triumph. It’s 1912, and Fred Fairly, promising young Cambridge scientist and junior fellow, has crashed his bicycle. He wakes up in bed beside a strapping young woman, Daisy Saunders. Naturally, Fred’s college is the last holdout at Cambridge to insist that all its fellows remain celibate, and naturally Fred falls immediately in love. A very good time is had by all.

A TLS retrospective review of Penelope Fitzgerald’s work mention this, her first book, a few years back. I couldn’t find a copy. Now it’s back in print, and it’s a lot of fun. Of a period in which Burne-Jones was madly in love with his model (who was married, and who had wealth and influence of her own) and William Morris’s wife was in love with Dante Gabriel Rossetti, she remarks:

The fact that Morris, Burne-Jones and Rossetti could live through these days and months and maintain such a convincing everyday life will only seem strange to those who's marriage has experienced no crisis.

Later, of the Aesthetes, she explains that

The Aesthetic movement, like all movement led not by artists but their followers, would first dilute, then copy, then exaggerate, then become ridiculous, then grow out of date.

It’s fascinating to me the William Morris and Edward Burne-Jones went off to Oxford together, already friends, expecting to become ministers and, someday, bishops. At Oxford, they recognized that their lack of belief made this career choice difficult, and so they took up Art. It never seems to have occurred to either that they might not be good at art, that they might need talents or genius or that certain something. They just set to work.

This winter’s cold packs a certain punch. I seem to be on the mend, but expect limited blogging – or pretty much anything else – for a day or two.

Married Love: And Other Stories

A pleasant and thoughtful collection of short stories about love, mostly concerning people who are not married to each other.