Two dishes might be worth a memo. First, I put together a soft drink for Kirsten, who is Linda’s 15-year-old Swedish cousin. Kirsten doesn’t believe in wine.

This is adapted from something Stephanie Izard did on Top Chef, which I watched while I was having my post-travel illness. Izard also used some pineapple juice, apparently, which might be gilding the lily. In any case, they were having a hurricane outside, so pineapples were not readily available.

Saturday night we went to Journeyman, renewing connections with Dave Gray, who is a very connected guy . Diana Kudajarova and Tse Wei Lim, who run Journeyman, cook the way I think I’d like to, and this is edging slightly (and aspirationally) to their style, as a student imitates the master.

We start with a nice piece of pork belly. It’s cured for a week with salt, spice, and maple syrup. Then it was hot-smoked for three hours over cherry, to an internal temperature of about 155, and cooled. Before serving I cut it into 1” cubes, and finished them by deep frying them for about 8 minutes in hot canola oil.

Figs are figs. Cranberry relish is right off the back of the bag: 1 bag of cranberries, one whole unpeeled orange, 1 cup sugar, food processor.

I was making duck sausage (for duck burgers) for a different course, and after my trip to Spain I thought I might try rendering the left-over duck skin for a few crunchy bits. Turned out surprisingly well; save for the files.

The mustard ice cream is adapted from an everyday vanilla ice cream recipe. In the creme anglais, vanilla bean is replaced by a handful of lavender leaves, the sugar is halved, and for 2C of anglais I added 6T of seedy dijon mustard. 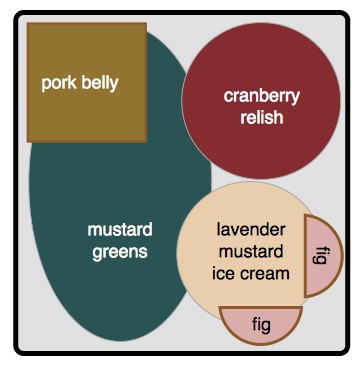 This isn’t exactly great for your diet, but there’s a lot going on. Pork and mustard, of course, playing along with very hot and very cold. There’s also sweet (the ice cream, the cranberry relish) and bitter and some umami. Fat and acid over vegetables: it’s a vinaigrette! And the cured, smoked pork belly is essentially bacon, served in an unusual form factor, and everything goes better with bacon.

I served this as second course, but it could work fine as a dessert, too.