Those Trojan Girls has a big cast. We start out with the big cast we inherit from Euripides and Seneca, and then we’ve got their classmates, teachers, police, resistance fighters, coaches, cooks, street kids, and two maids in love. Of course, most of the kids have a family back home, and since there’s a war on, lots of those families have urgent stories.

There was a lot to keep track of.

I can’t imagining tackling this without Tinderbox. For this project, my use of Tinderbox was (wait for it!) really simple: a note for each character and containers for categories of characters. Family members start as text notes inside the character notes but sometimes expand. (I was too slow to expand jottings about minor characters into full-fledged notes, and that caused confusion later.)

I also kept a Tinderbox map of the campus handy, which put a brake on the proclivity of Kenmire Hall to wander from one side of campus to another. 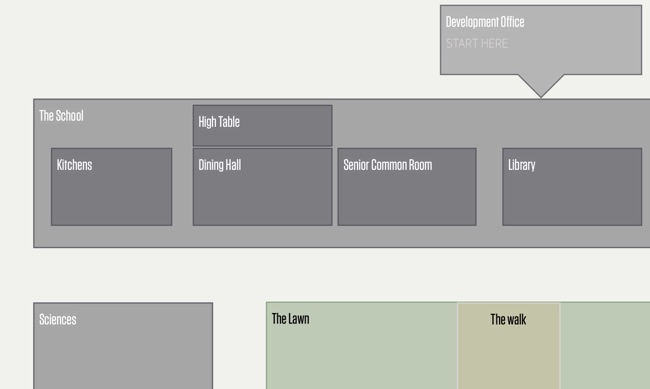 There’s a limit to how much work you want to put into this kind of infrastructure; one day you’re assembling notes on the backstory and before you know it you’ve got ten years of backstory, no novel, and you’re Henry Darger. Still, it’s good to write stuff down.

Outside Tinderbox, I also found it hard to keep everyone straight. At one point, I wrote entire scenes where I called Brianna something else, and Sofia kept becoming “Sophia.” Eventually, I threw together a few sketches and stuck them to the edge of my bookcase.