Moral Of The Story

Last week in Madeira, I spoke at the International Conference on Interactive Digital Storytelling about “Some Moral Questions Concerning Story In Immersive Hypertext Narrative” occasioned by the 20th anniversary of Janet Murray’s influential Hamlet On The Holodeck. Murray imagines a future medium in which the player-protagonist is immersed in a realistic simulation, an alternate reality, and her vision has been widely embraced as the end toward which new media naturally strives.

What, on the holodeck, are we to do about Ophelia? She is an enigmatic character, one whom the 19th century found more fascinating than the 21st. Polonius speculates that Hamlet loves her; Laertes views a sexual relationship as a threat. If, as interactor, we have meaningful choice, might some combination of choices lead us to propose to marry Ophelia? To kiss her? To have sex with her?

All these choices are problematic. Can a simulated character marry? Specifically, can she consent? The presentation of meaningful choice within the fictive world leads us to the very threshold of the Turing Test, for the characters must necessarily be sufficiently convincing as to invite suspension of disbelief . The choices, moreover, are ours and the performance is ours as well: it is one thing to witness theatrical events that you cannot affect and that harm no one; it is another thing entirely to perform yourself what might be a crime. In the playhouse, Ophelia drowns every night and twice on Saturday whether we purchase a ticket or not; on the ho- lodeck, Ophelia drowns only if we fail to prevent it. And if tonight we want to see her drown, who have we become? 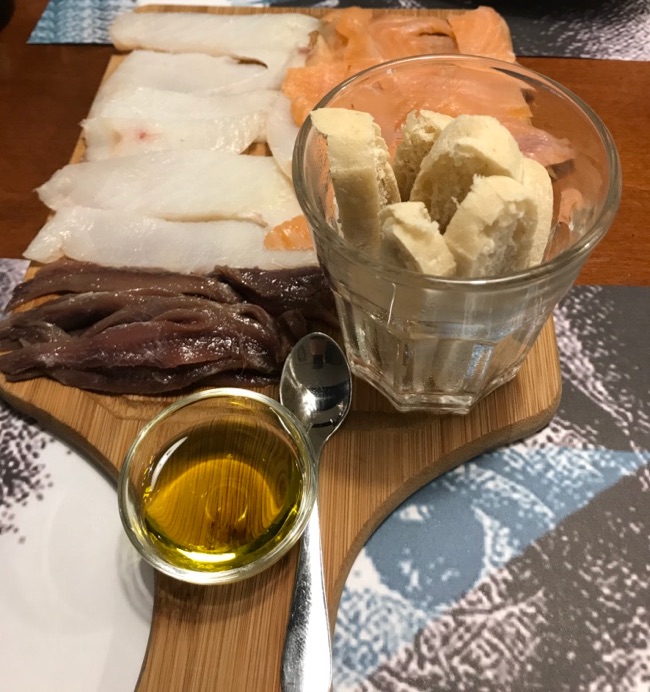 The first restaurant I ever visited based on a Facebook recommendation. It’s Monday night — a low Monday in newly-offseason Madeira— and I’m looking for an early dinner after missing lunch. Mula’s all about mussels and all about good, informal, multilingual service with discretely communal tables and a real effort to make tourists feel welcome without making them feel like marks.

Nifty decor with lots of fresh concrete. Some nifty Portuguese wines, and an unusual effort to make a case for beer pairings.

Smoked cod is really nice, and the anchovies were good. The mussels were dandy, too.

I’m off to the International Conference on Interactive Digital Storytelling, where I’m giving a little workshop paper on “Thoughts On Some Moral Question Concerning Story In Hypertext Narrative”. I’m looking at some questions that came up while I was working on Those Trojan Girls and thinking about the 20th anniversary of Hamlet On The Holodeck.

In the theater, Ophelia drown seven days a week and twice on Sunday, whether we buy a ticket or not. It’s not our fault. On the holodeck, though, it is.

The conference is in Madeira. I’ve never been there. Interesting program: looking forward to it.

The author of the wonderful Everything I Never Told You returns in a new tale of suburbs gone wrong. In placid Shaker Heights, Ohio, the placid house of the Richardson family is afire. Lexie, Trip, and Moody were all away from home. Mr. Richardson is at work, of course, and Mrs. Richardson woke up in plenty of time and she’s fine.

No one knows where the youngest daughter, Izzy, has gone.