The Morning Will Come When The World Is Mine 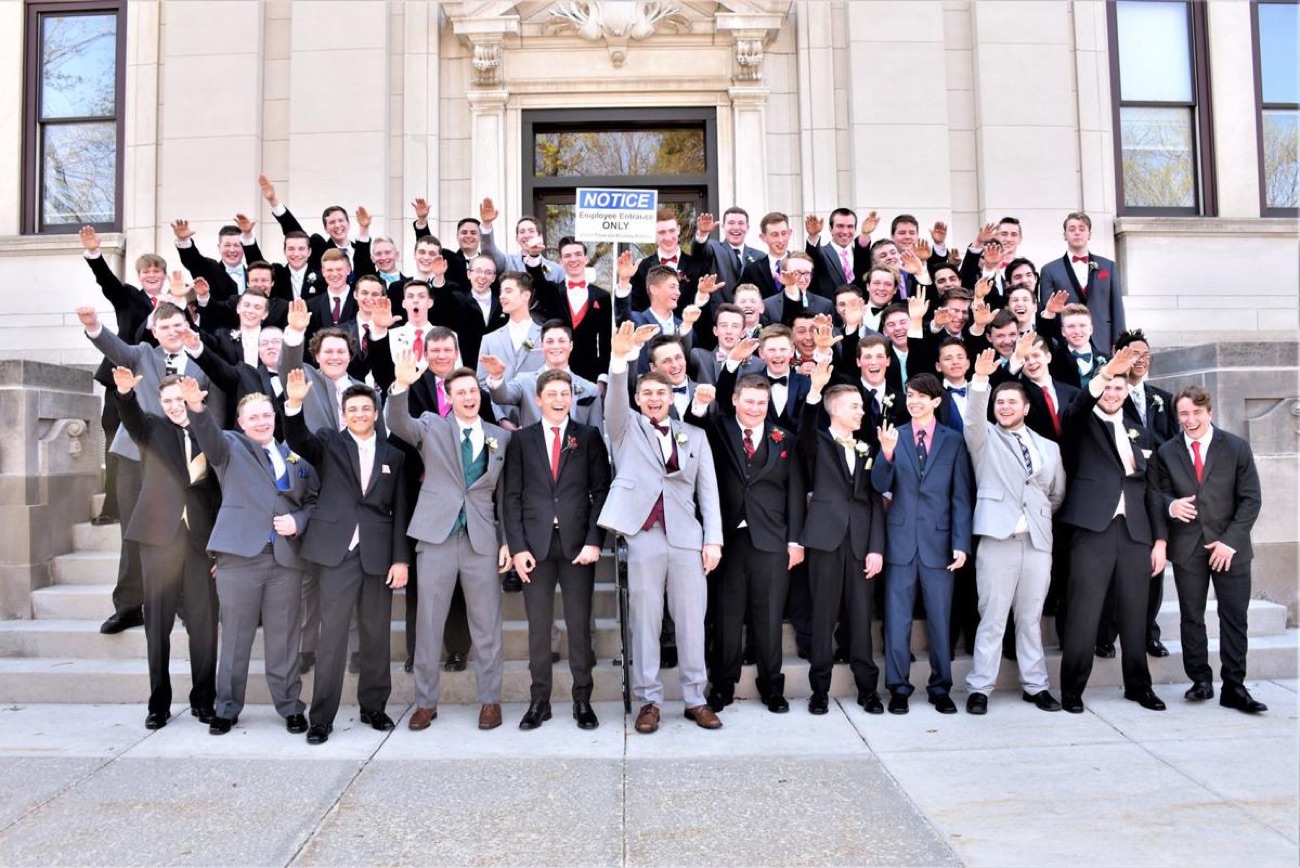 We are headed for trouble.

Minnesota Nice was originally written for a British site’s pre-election feature. That didn’t work out, despite lots of effort from some very capable people, including the only Republican with whom I’m still on speaking terms. I’m grateful for their work. That failure is one tiny illustration, I think, of why simply being nice isn’t going to solve our problem.

My editor warned me that his readers might know as much about Minnesota as I know about Shropshire. I know that there are lads in Shropshire — or there used to be at least one lad — but that’s about it. In the article, did my best to explain Minnesota, and editors did a lot of work to explain even more.

Resurgent racism and anti-Semitism — such as the Baraboo, Wisconsin prom boys pictured above — were central to the election of 2018. I wrote:

That age-old question of whether Jews and persons of colour are fully people has once again been placed on the American political agenda. At the University of Minnesota last March, posters asked “Why Are Jews After Our Guns?’ Pro-gun flyers were illustrated with caricatures of scheming, long-nosed Jews. One student at a St. Paul, MN university recently awoke to find “Nigger Go Home!” scrawled on his dormitory door. Presidential tweets and speeches frequently allude to immigrant-driven crime waves that do not, in fact, exist.

The editors felt, I expect, that this was too long and too elliptical. They preferred:

Even arguments that we thought long-settled are being fought again. One of America's great achievements in the 20th Century was establishing that religious and ethnic minorities were first-class citizens with the same rights and opportunities as the descendants of those who founded this country. Since Trump's rise, antisemitic flyers have appeared on university campuses across the country, and Presidential tweets and speeches frequently allude to immigrant-driven crime waves that do not, in fact, exist. Religious and ethnic minorities get the message: you are an “other”, you're not welcome here.

This does appear to be what reasonable American conservatives now believe. I have one word for it, and that word is: shameful.

The great achievement of 18th Century America was religious and ethnic tolerance, the resolution that all men were created equal. It’s not a 20th-century novelty in the United States (though it is in Britain, where Jewish emancipation waited for 1867 and was not complete until 1890). The American Right has forgotten who we are: unum e pluribus. From 1787, we have held that “no religious test shall ever be required as a qualification to any office or public trust under the United States.”

Those “descendants of those who founded this country” include African-Americans — unless you are writing Crispus Attacks , Peter Salem and so many more out of our history. (That’s their plan.) Mordechai Sheftall was Jewish, and he was Deputy Commissary General for George Washington’s army. Richard Lushington’s “Jew Company,” recruited from Charleston SC, had a company cantor. If I recall correctly, the 8th Maryland Regiment, organized in 1776, spoke Deutsch.

The first successful revolt against colonial control in the future US was, of course, the Pueblo Revolt of 1680. Much of the Iroquois Confederacy supplied troops and supplies to the US Army.

The crazed Republican right holds that the US was founded as a white and christian nation, and that it generously welcomed minorities to share “the same rights and opportunities.” This is untrue, but even if it were historically defensible, it would be un-American. We have not always lived up to our ideals, but these have always been our ideals. None of us are other, and who are these preachers and pundits who choose to welcome us? We have always been here. The people trying to erase us are the people teaching little boys to salute their aryan nation before the prom, the people building concentration camps for toddlers.

Democrats and Republicans once differed in degree but not so much in kind. Conservatives wanted less government intervention in the economy and in transforming our social relations while progressives wanted more.

This might be the view of progressives held by Ronald Reagan’s ghost, but it is completely unmoored from reality.

In the 1950s, nascent movement conservatism struggled to preserve segregation against a growing wave of revulsion. It argued that integration was unfair government interference with the South’s customs: if the South wanted lynchings and lunch counters, it said, that was up to them.

Movement conservatism struggled unceasingly against birth control and against women’s sexual autonomy. Since 2003, Republicans have railed against Lawrence v. Texas, the decision that decriminalized gay sex. Today, if you find a bathroom bill, it will be sponsored by Republicans. If you find a crazed wingnut eager to discriminate against gay couples, that wingnut will almost surely be Republican.

Framing Republicans as wanting less government intervention in our social relations is coded but clear: in plain language, it is a call for a the government to return to open discrimination against Blacks, Asians, gay people, Jews, and unmarried couples. It is in an attempt to shore up what movement conservatives and their theocrat allies consider old-fashioned values. This is not “less government intervention in transforming social relations;” it is seeking a new Confederacy, the restoration of as much of the Jim Crow South as can be salvaged.

Multiple editors saw these changes, and thought them innocuous.

This is not normal.

There is not much room for compromise: a nation half Nazi should not long endure. A nation where all the little boys shout “Heil!” (except one who makes a white power sign and one who just stands there and smiles): that’s the nation “conservatives” want us to be.

Even their best, most thoughtful voices seem so bent on retaining power forever that they cannot see the ends to which that power is already being used. They dream of a new morning in America. We have heard that song before, and we know what comes next: The morning will come when the world is mine/The world belongs to me.

It’s an old tale from way back when.

And we’re gonna sing it again.