The NeoVictorian In Tough Times

We are facing a bad time. We are already in a recession — many of us have sensed for some time that times are not good, that governments are shading the statistics for their own purposes. But soon, clearly, a lot of programmers and designers are going to be on the street, and the street will not welcome them.

We all woke up one day to find ourselves living in the software factory. The floor is hard, from time to time it gets very cold at night, and they say the factory is going to close and move somewhere else. 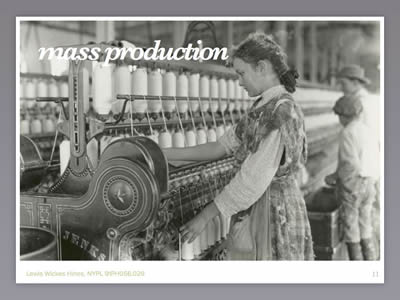 In the coming recession (or the second depression), even more programmers and designers will be told to work longer hours on worse projects and worse products, to cut more corners, to grind out more junk because that’s what the client wants — and if we lose this client, you (or all your coworkers) might be out there looking in. Even more scientists and scholars will be asked to share in the general privation along with the CEOs and investors.

The law, in its majestic equality, forbids the rich as well as the poor to sleep under bridges.

We have nothing to fear but fear itself. Harold Bloom today invokes Emerson:

The nonchalance of boys who are sure of a dinner, and would disdain as much as a lord to do or say aught to conciliate one, is the healthy attitude of human nature. A boy is in the parlour what the pit is in the playhouse; independent, irresponsible, looking out from his corner on such people and facts as pass by, he tries and sentences them on their merits, in the swift, summary way of boys, as good, bad, interesting, silly, eloquent, troublesome. He cumbers himself never about consequences, about interests: he gives an independent, genuine verdict. You must court him: he does not court you. But the man is, as it were, clapped into jail by his consciousness. (On Self Reliance)

We remember the last little market crash for shaking out the dotcom excess and ending the first weird years of Web exuberance. What we have too often forgotten is how some people picked themselves up the wreckage of the Web boom and created surprising new things and surprising new companies. These were the years when the netroots got started, when Rails happened. Everyone said "blogging is so 1999", but the first pro bloggers didn’t care about that.

It may be that we’re in for some rain. It’s not our fault, and it’s not our doing. Until the sun comes out, we can work indoors: write books, write software. Or we can go outside and get wet; that’s fine, too. We’re strong and young, the water will do us no harm, we can always find ourselves a dry towel and a hearth and we can be sure of dinner.

Update: Tim Bray on Getting Through Tough Times.