In my talk at Alcalá de Henares, I looked to the future of classic hypertext. The future of serious writing lies on the screen, and the link is the most important new punctuation since the invention of the comma: we know this. The iPad is important: we know this, too. 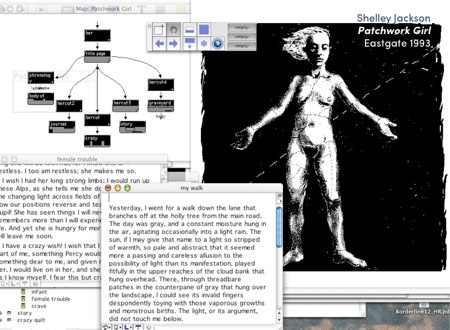 My talk explored old hypertexts in new environments. A lot of what we talk about — the demise of HyperCard, of Director, of Flash — has been talked out; either this is your problem, in which case it’s time for you to do something, or it’s not, in which case there’s nothing more to say. Storyspace 3 is my problem; people listened attentively, said nice things, and nobody asked a single question about performance, architecture, implementation, budget, design, typography, packaging, distribution, or censorship for the remainder of the conference.

One key point about the iPad and links has not, I think, been widely discussed. Before the iPad, we used a mouse or a trackpad; on tablets, we touch. We have been talking since the beginning of tactility, of words that yield.

But there was one thing we had forgotten.

Let’s not get ahead of ourselves. The day is early, we have many lessons to learn, and we can only learn those lessons by building systems and using them. But the very directness of the tablet, the disappearance of the device between ourselves and the work, poses a new rhetorical and stylistic puzzle for the hypertext writer. This is an urgent question of craft that we should be discussing, one far more pressing in my view than embedding clever puns in your java source.