Lyra is in her twenties, a postgraduate student at Oxford, and she and her daemon are not speaking to each other. That is to say: Lyra and her soul (spirit? Genius?) have fallen out. It’s a profound and thrilling premise, and Pullman explores it wonderfully.

Once again, I find myself reading Pullman’s exciting and engaging urban fantasy, always notable for the thoughtfulness of its characters even when they are children, and once again I realize that he’s doing something much larger and more serious than I’d thought. There’s lots here: a bravura attack on aspects of postmodernism, a thoughtful response to Karl Ove Knausgaard. There’s even a hypertext fiction vignette!

A new version of Tinderbox, Tinderbox 8.1, is out now.

You need Tinderbox 8.1 if you're using Catalina. But you don’t want to install Catalina if you don’t need it — not yet. This goes against my usual advice, because usually upgrading right away make everything better. Catalina has headaches. They’ll get fixed. And there's important stuff in Catalina, too, for the future. But if you don’t have to upgrade right now, wait a few weeks.

Tinderbox 8 has a big speed bump, especially if you're working with big and complicated documents. Opening documents, saving documents, adding new notes — it’s all faster. There are dozens of other improvements, too.

A new Michael Ruhlman! It’s nice to see one of the best food writers (and bloggers) back in harness, writing convincingly that it makes a lot of sense to cook your own food. Ruhlman takes a close look at ten recipes — roast chicken, BLT sandwiches, lasagna — and looks at different ways you can make them from scratch. For the BLT, you can cook the bacon. If you like, you can bake some nice bread, too. While you're at it, you can whip up your own mayonnaise. Or you can go for broke and grow some home-grown tomatoes!

It’s just a matter of planning a little bit ahead. If you want roast chicken, buy a chicken so it's already in your refrigerator. If you want beans tonight, soak them in the morning.

The key idea is that you can have fun, and have good food, but you don't need to go overboard if you don’t want to.

Hypertext And The Age Of Trump

An excerpt from the closing chapter of Intertwingled, a reflection for my colleagues on 30 years of research in hypertext and new media. 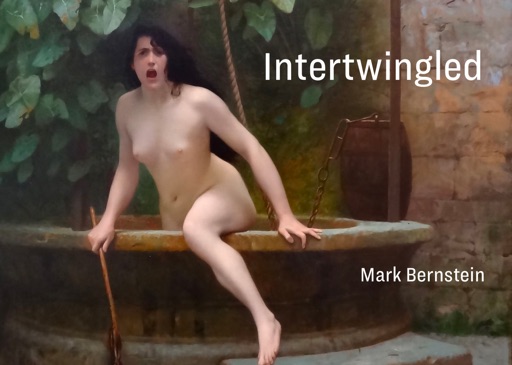 The future is not what it was.

Ted Nelson concludes Dream Machines with the peroration, “Yours for a better world, before we have to settle for Any.” We now see he was too optimistic.

Virginia Woolf wrote in her journal, “The future is dark, which is on the whole the best thing the future can be, I think.” Dark, she seems to say, as inscrutable, not as in terrible. We often mistake the one for the other. Or we transform the future’s unknowability into something certain, the fulfillment of all our dread, the place beyond with there is no way forward. But again and again, far stranger things happen than the end of the world. [Rebecca Solnit, Hope In The Dark]

The December day the wittiest friend I’ve ever had had come home from the hospital. I brought her homemade soup and instant lies. Both offerings were meant to comfort (me as well as her); neither could be swallowed with ease any more. I found her sitting at her living room window, watching the melting snow. ‘I’m sitting here in a blaze of optimism, planning my garden,’ she said. We both laughed, an astonished burst, and then stared at each other in shocked recognition of what had been unspeakable between us, that maybe she wouldn’t live to see the garden’s blossoming. She didn’t. [Judy Wax, Starting Life In The Middle]

We built tools that would permit legislators to understand the laws on which they voted. The legislators did not want to understand. They wanted to win the next election, or to receive a lucrative sinecure if they lost.

WHERE are Elmer, Herman, Bert, Tom and Charley,

The weak of will, the strong of arm, the clown, the boozer, the fighter?

All, all, are sleeping on the hill.

Together, we built textbooks that could adapt themselves to readers of disparate backgrounds, inclinations, cultures. The readers did not want such textbooks; they wanted credentials.

We attacked a problem that had plagued storytellers since Plato: how can a story be true when you tell it once, in one way? We made new media: clumsy, brutal, stumbling as new media are, but new. People didn’t want new media: they wanted to monetize their cellphone videos, and they wanted to write (but not to read) conference papers about them.

The PR agencies of thieves, extortionists and murderers wanted to improve their clients’ image. We gave them Wikipedia and didn’t ask for a receipt.

We built research platforms, scholars’ workbenches, digital libraries and crisis management systems so that, when we needed an answer, we’d be ready. When the day came and the planet was catching on fire, people decided they’d rather watch a reality television personality own the libs.

Liv Burnham is riding with her date in a car, heading home. In the back seat, her best friend Morgan is canoodling with her date’s scary but handsome older brother. The car swerves; there’s a terrible accident. She wakes up in the hospital, in Morgan’s body.

This enactment of multiple childish fantasies (you’ll be sorry/you’d be happier if I was someone else/I wish I was part of my friend’s family and not this disaster) is a lovely setup for a problem novel, which Aguirre pulls off with style and without more mystic nonsense than the premise absolutely requires. Liv is smarter than Morgan, which is both an opportunity and a challenge. Liv liked science, and Morgan liked art and fashion: who, now, are her friends? If she dates Morgan’s boyfriend, is she cheating on Liv’s? Morgan is rich but her single-parent father is distant; is it her duty to resent him, or is that yet another betrayal? The book’s framework is sometimes flimsy, but there’s some plain, fine writing here.