False Intentions and the Fallacy of Finding

My talk at OZ-IA this morning discusses False Intentions and the Fallacy of Finding. Couldn't make it to Sydney? You can look at the slides on the Lecture Notes page. 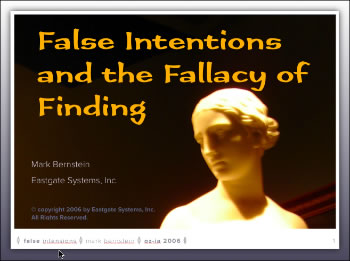 Some time ago, I made a sketch called Guantanamo Study for this weblog, based on Hiram Power's once-famous statue of The Greek Slave. It's been seen by a lot of people. That's good: it's political art, and it's meant to be seen. But did those people intend to see this image, or to think about The Greek Slave and American torturers? Where does this meaning lie, anyway?

Fact checking is simple, so it's simple to study. That's not why most of us read hypertexts — not even on the Web.

Filling out forms is simple, so it's simple to study. That's not what we do on the Web -- not even when we're shopping.

The street finds its use for things: this is the message of socially-constructed sites, of the sites we sometimes call "Web 2.0". We can't impose simple structure; a Web site is not a zoo, and even zoos no longer rely on simply classifying the subject. (If you stop people in a zoo and demand that they tell you what they're doing and justify themselves, they might say that they're trying to find the polar bears. Is this the whole answer?) 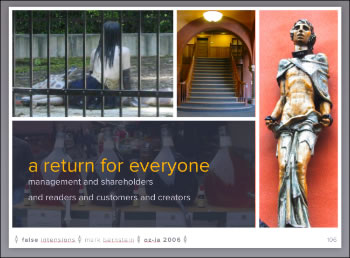 We need to move beyond a simplistic reliance on classification and search. Hypertexts have rich structures, and flattening them with search or simmering them into folksonomical tag stews doesn't serve real readers or real writers. Whether we're teaching students, convincing voters, or acquiring customers, we require rich and flexible structures that can say many things at once.

Architecture began as the defense of art against engineering. IA began as an effort to help Management reign in the wild creatives. It's time to move on, and to find ways to design structures that offer real returns to writers, readers, customers, and investors.