Speaking of mad dogs, the persistent heat of Kolkata doesn’t knock you over the way the blast furnace of Southern Florida or summer Italy can, but it’s unrelenting. I took a relaxed morning stroll this morning, staying in the shade and toting a liter of water with me. Within an hour, my dockers and oxford cloth shirt were sopping and sweat was streaming down my face and running into my eyes.

It doesn't improve much when the sun goes down, and things get more complicated still because it can be hard to find even places that you can’t miss. Addresses are often notional; 42 Universe Lane might be on a side street that runs off Universe Lane. Google maps turn works well in Kolkata, but that doesn't help when, as last night, the ubiquitous 3G service decides that nobody shall have internet. I guess the phone company’s ISP was down.

So I walked a mile to Arsalan, and then another mile or so because Google showed the restaurant to be just a little way North of the main street, and that led to a busy set of back ways which were fascinating and complicated but which did not advance the cause of finding dinner. The crowded sidestreets, filled with people and stalls and sidewalk restaurants, reads like a street fair, a festive special event and not just another night at home.

A nice fellow saw me and asked to help, and told me "Right! Just down this block, turn right!"

After that, it only took me fifteen minutes to find it. 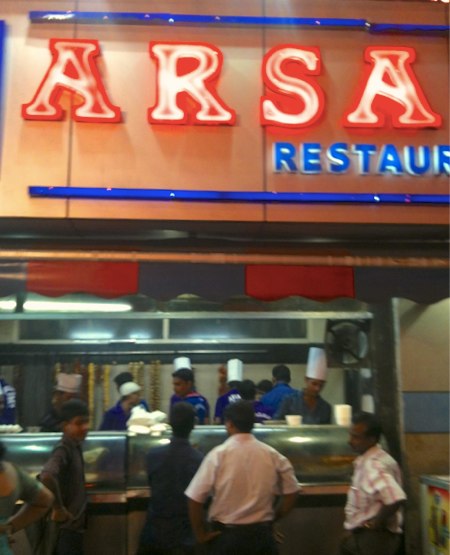 Arsalan was another Chakraborty suggestion.

Calcutta has a rich tradition of Mughlai food. Visit Arsalan, in Park Circus (not Park Street, but close by). Try the mutton biriyani (it may be a little too rich for you) and try the Chicken Arsalani Kebab (tender chicken thighs grilled in traditional terracotta charcoal oven with a cheese crust outside.)

Those kebabs are much talked of on Zomato.com, which seems the most enlightened Kolkata food forum, and they’re very good. In particular, the chicken is very good, rich and tender and attentively cooked. I’d imagined the cheese crust would use a hard cheese, but it’s actually something like a cheddar or Mexican melting cheese. It adds richness and has a certain interest, though I still think an admixture of a hard cheese could add some bite and texture. (For that matter, yesterday’s Daab Sherbet was great but left me thinking that “this might benefit from some acid.” Now, maybe citrus wouldn’t work right with the floral (?rosewater?) hints of the drink, but I think I’m still missing part of the whole aesthetic of this cuisine.)

It’s interesting, too, because tandoors are famously hot, and so I’d expected a densely caramelized chicken. The cheese crust reinforced that: the usual point of crusts is to keep the meat from being overcooked. But these kebabs were very gently browned; if I were trying to replicate them, I think I might smoke them for a couple of minutes and finish in a very moderate oven.

I think the point of the cheese here is to add richness and depth; this is party food. At the table next to me was a nice middle-aged guy in a polo shirt, and three girls, maybe 8-12, all of whom were made up to the nines and dressed to kill.

The butter naan I had with the chicken was wonderful. I tried to ask for advice about which bread to order, but again that wasn’t in the cards; I could have any of several naans, various rotis, plenty of parathas, but I had no idea what made sense. To be honest, I could make a meal from these wonderful breads alone; would the restaurants hate me?

In the US, I think we see Indian cuisines as balancing the heat of peppers with the bite of savory spices. My meals here — starting with a remarkably tasty vegetable curry on the Jet Airways flight — suggest that cooks are even more deeply interested in sweet. But where Mexican balances sweetness with acid (citrus in ceviche, tomatoes in picadillo), I sense that the cook in India reaches for bitterness instead. Is that right? I should’ve asked the cook I met yesterday.