The Best We Could Do

A lovely graphic novel of the author’s search for an explanation for her unhappy Vietnamese-American family. Bui started this book as an alternative to her dissertation, which explored the history of Vietnamese refugees in their historical context but failed to get at the emotional core of her experience. An exceptional and concise portal into a complex history, rich with nuance and unexpected gentleness and complimented by Bui’s wonderful portraiture and deft watercolor work.

I spent a delightful long holiday weekend in Wellfleet, thinking about some problems involving writing hypertexts that were raised in Stacey Mason’s superb dissertation advancement proposal. Stacey has always been more interested than I in diegetic links — links that concern what happens in the story.

One observation I made in the course of these contemplations is that revising a complex hypertext is often hard.

Consider this contrived example. We’re writing a thriller, say, and we’ve just finished a fight scene. We had lots of choices and many variables were in play, but that’s over and we won (yay!) and now we’re starting a new episode. The start of that episode binds up lots of incoming links, and then offers a bunch of choices for what you do next. 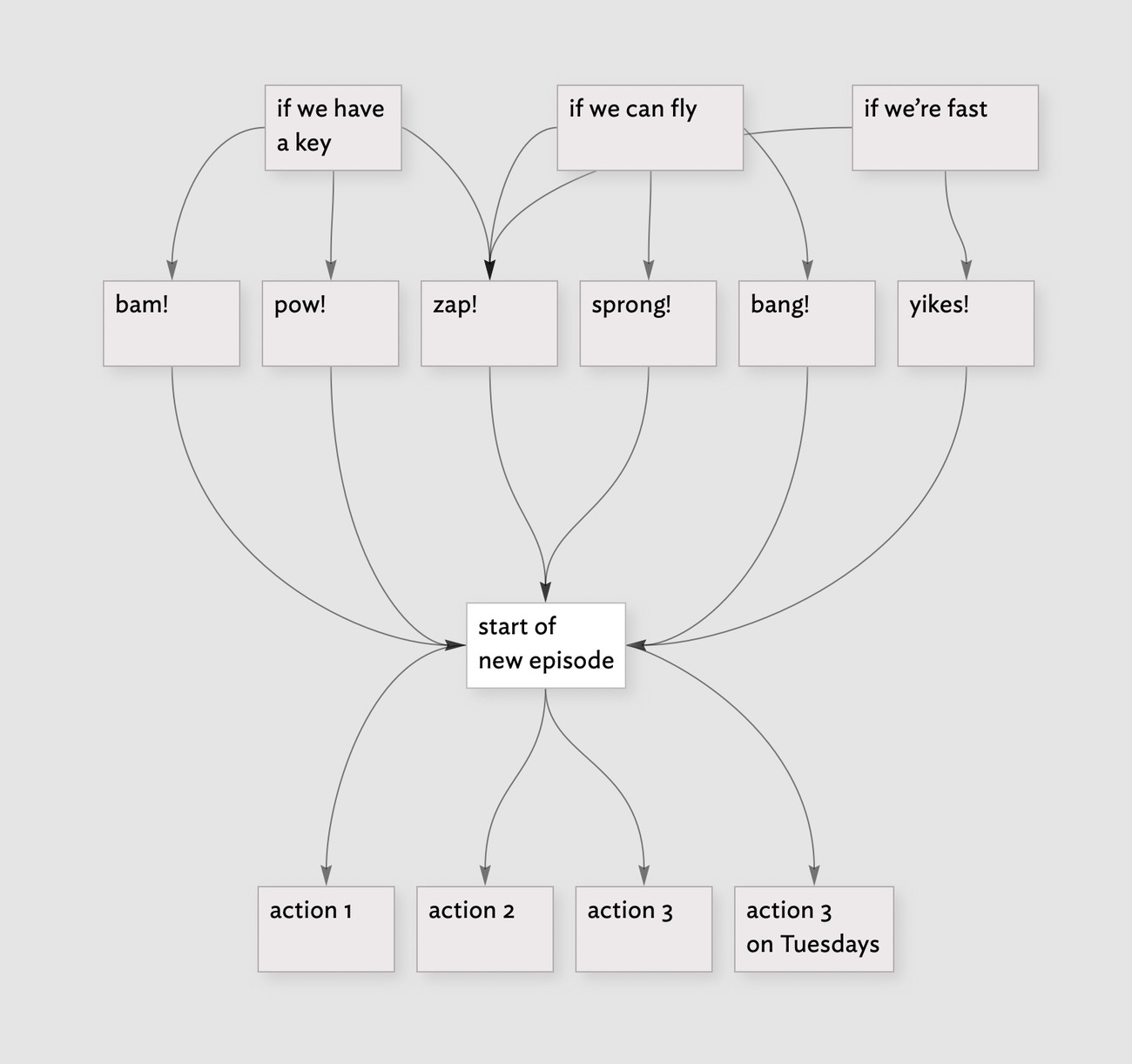 My observation was that it’s easy to add new options to the fight scene, or new opening moves in the episode that follows it, but any structural change to the start of the new episode is going to be a bear. Suppose you want “start of new episode” to be two separate notes? Or a new storylet? You can’t just paste in the new text: you’re going to need to revise all those inbound links, or all the outbound links. Or both. That’s can be a lot of bother, and bother inhibits revision.

This can be avoided by splitting the transition in advance. The destination is an empty writing space, connected to the new episode by a shark link that is followed instantly when we arrive. 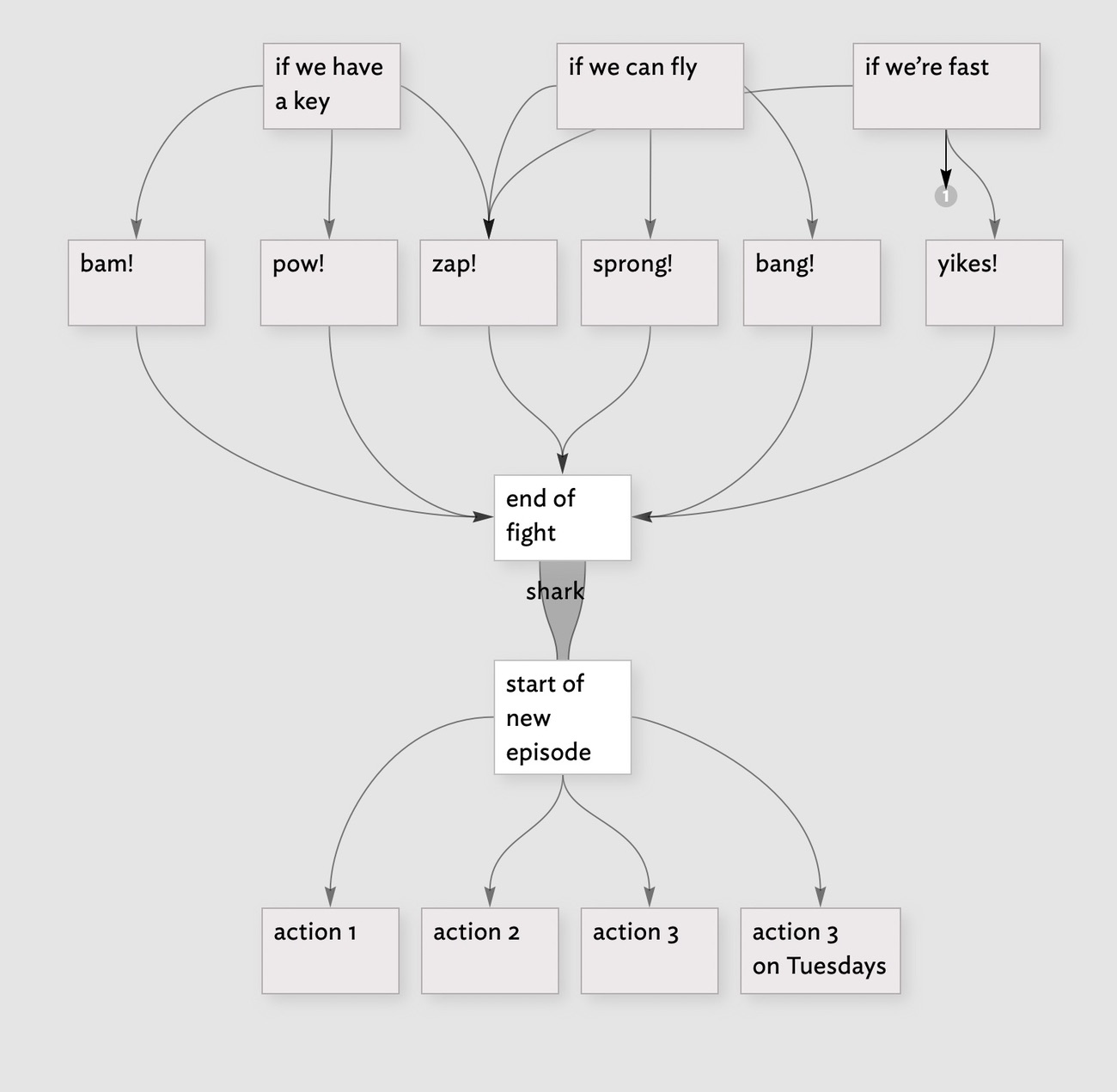 The new version acts just like the old one. But if we want to insert a writing space or a storylet before the new episode, we just replace one shark link and can leave all the rest of the links untouched.

Adding articulation points like these should facilitate editing and revising hypertexts.

A sign of our current predicament is that I can’t think of any place to discuss this sort of question. It’s no longer the sort of thing we talk about at ACM Hypertext. ICIDS seems to regard hypertext as a quaintly historical concern. ELO? Surely, you jest. EBR? Not enough theory. GDC? Too much theory, too few dollars. The blogosphere used to be good enough, but it’s pretty much gone now.

Bone Guard One: The Mongol's Coffin

E. C. Ambrose author of Elisha Barber, dips a toe into the thriller in this joyful gallivant that springs from a chance encounter of a graduate student of ethnomusicology and a mercenary entrepreneur who is trying to set up a squad for protecting valuable archeological relics. From rooftop snipers in Somerville MA to fast horses on the steppes, we’re on the track of history and treasure — while the full power of China is out to stop us.